It was a chilly morning on the 6th of June 2015. I woke up at 4 am to make sure that I would not overslept. I have a history of oversleeping when it comes to waking up to join early morning activities up to the point that some of my friends would told me on Whatsapp group message: “Make sure you wake up, Khai!”. 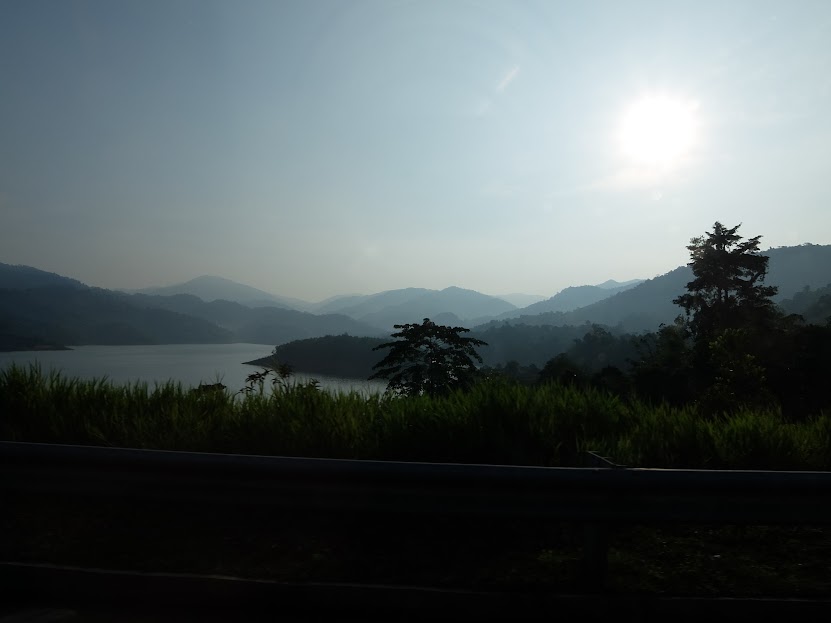 According to the itinerary that Renuga from Tourism Selangor emailed me, I have to be at Dataran Kuala Kubu Bharu at 7.00 am. Yes, I have been selected to join the second #tsdayout of the year – Bukit Kutu Expedition. 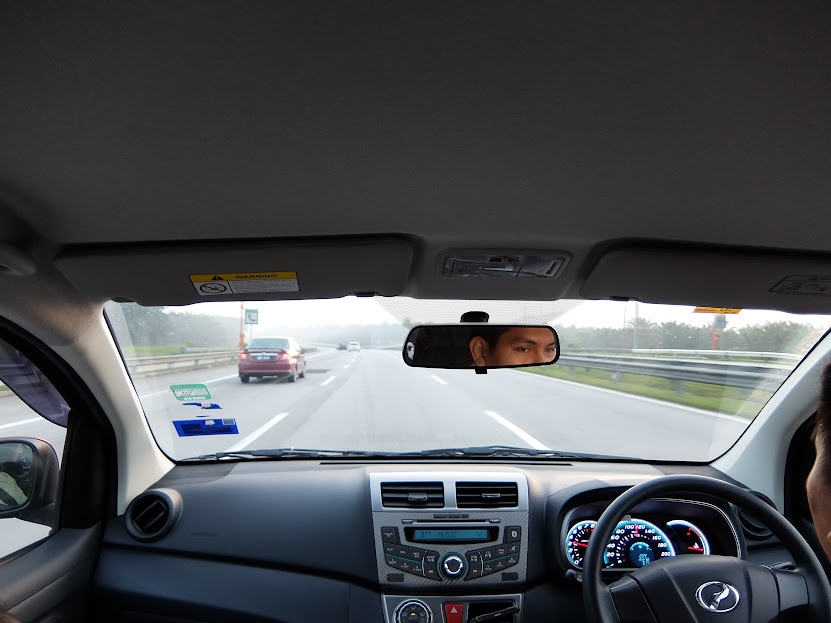 I decided to carpool with Adam and Anis. Adam picked me up at Kompleks PKNS Shah Alam at 6.45 am and we knew that we would be late. As a matter of fact, we were. We were the last ones to arrive at the Dataran, at around 8.00 am. We were then given the official #tsdayout tee ( bright pink! – but I decided not to wear it because I did not want to wear cotton tee for the hike) and off we went to Kampung Pertak at the foot of Bukit Kutu. 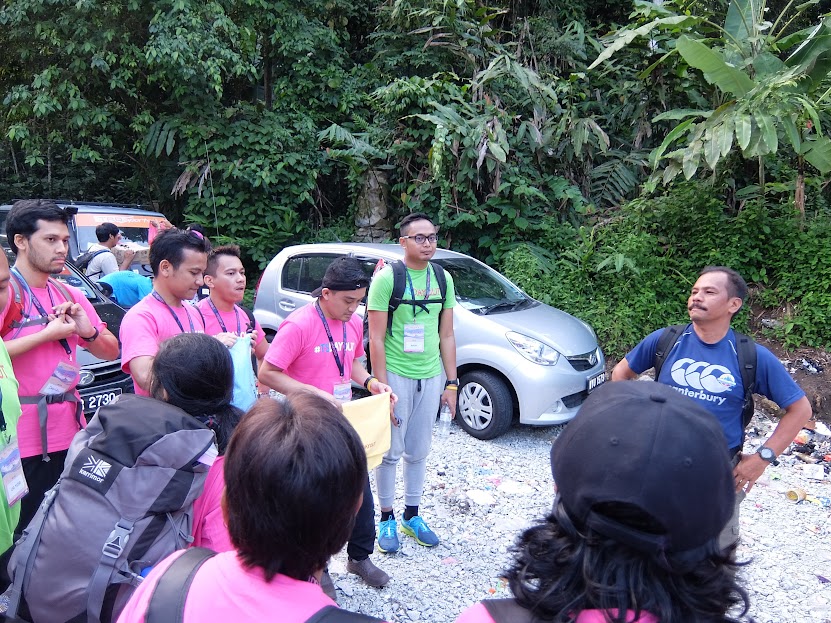 I love nature. I love hiking, though I seldom do it since some of my hiking friends got married. Before Bukit Kutu, I have been to Gunung Angsi, Bukit Broga, Gunung Tok Wan and Bukit Gasing. However, Bukit Kutu is different than the other hills and mountains that I have scaled. Bukit Kutu will actually be the first official mountain that I will hike. Although its name is ‘Bukit’ meaning Hill, it has an elevation of a mountain i.e. more than 1,000 metres above sea level (1053 metres above sea level). 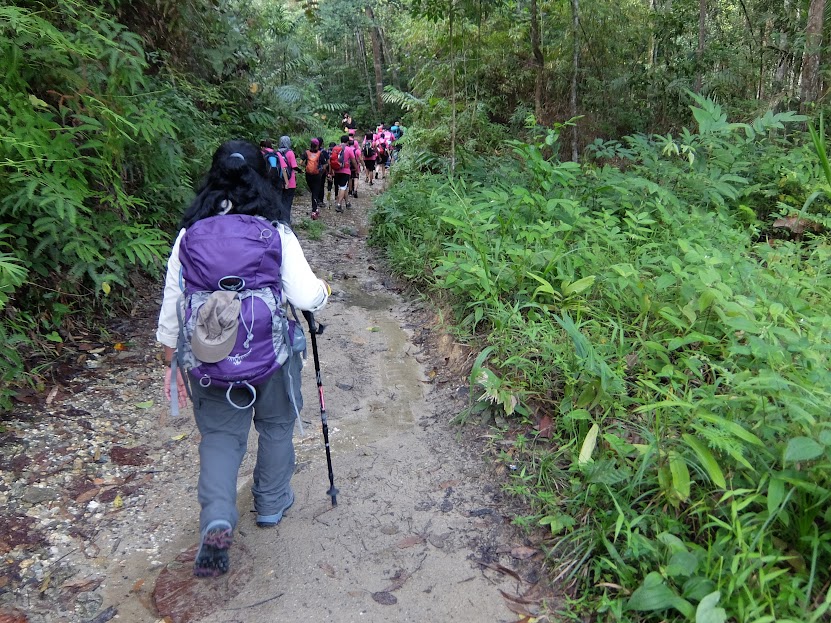 Once we arrived at Kampung Pertak, we were given safety briefing and we did some warming up. At 9.00 am on the dot, we started our expedition to hike Bukit Kutu. 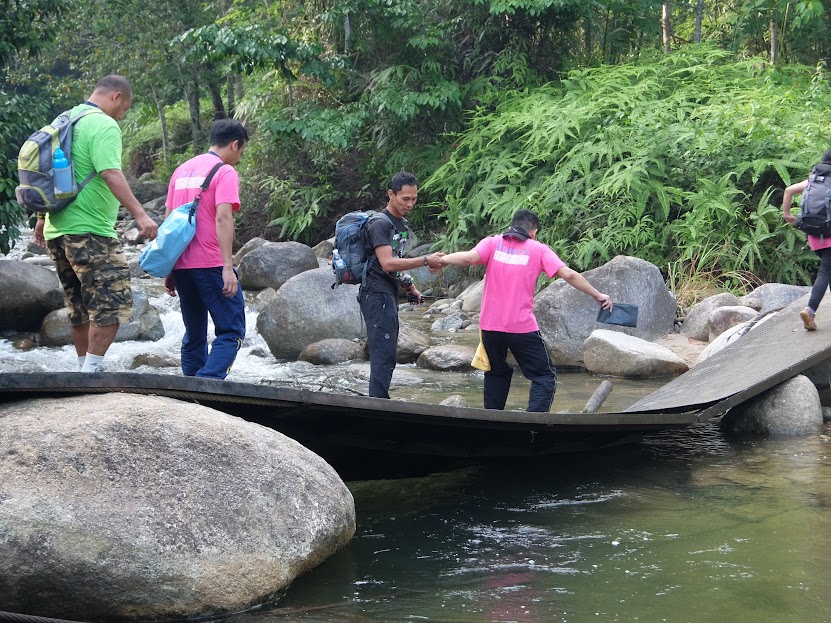 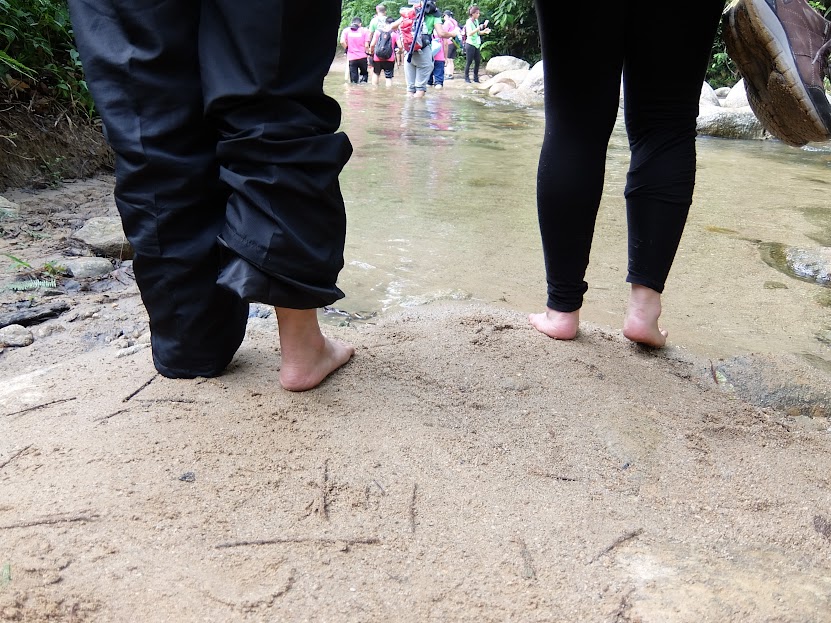 After a little bit more of trekking (or walk in the park, as one of the guides called), we met another river crossing without a bridge. So, we took off our shoes and crossed the river. It was so chilly but the water was calm. I made a mental note: I would take a dip here during descent. 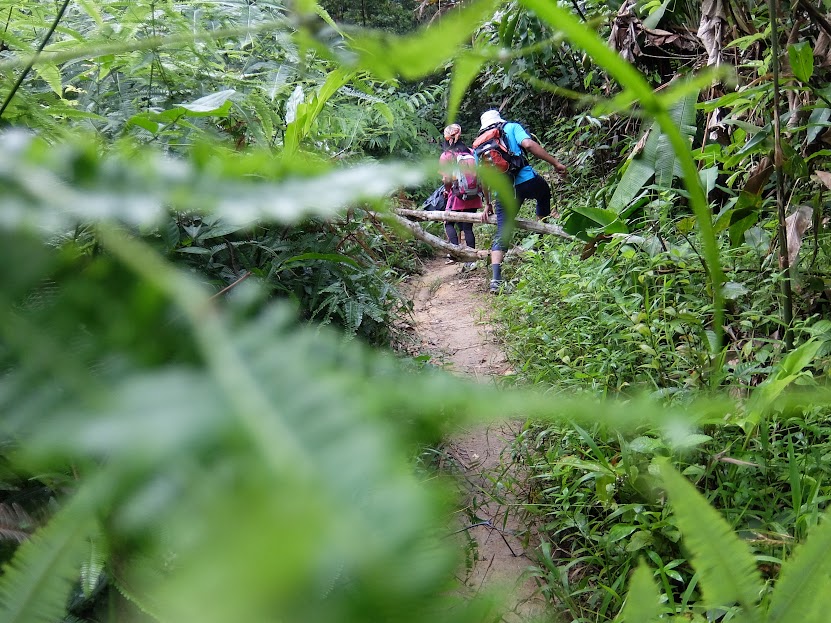 Things started to get tough afterwards. There was no more walk in the park as it was a hike all the way up. Some routes were steep while some were quite acceptable. But one thing that set Bukit Kutu apart from the other places in Malaysia that I have hiked is the fact that there are so many bamboo trees and bamboo fallings all the way up. 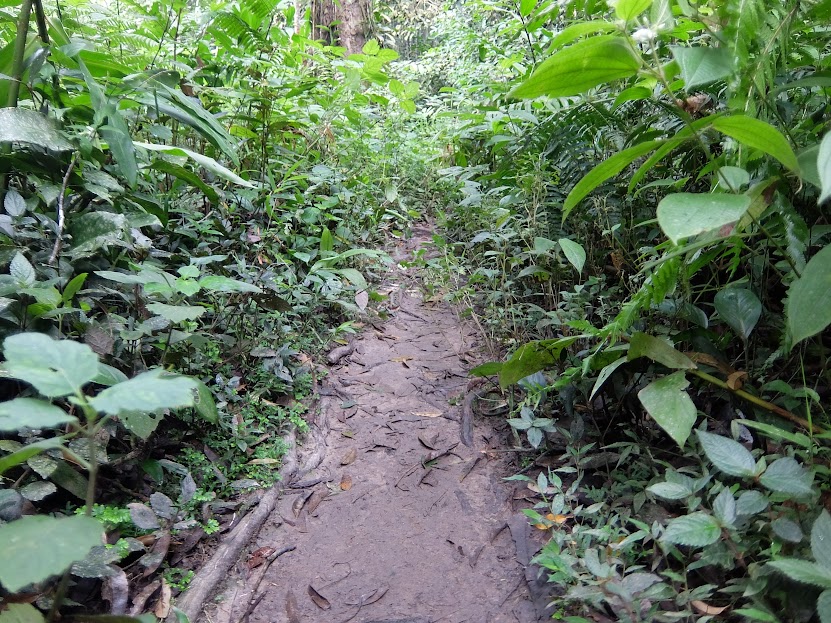 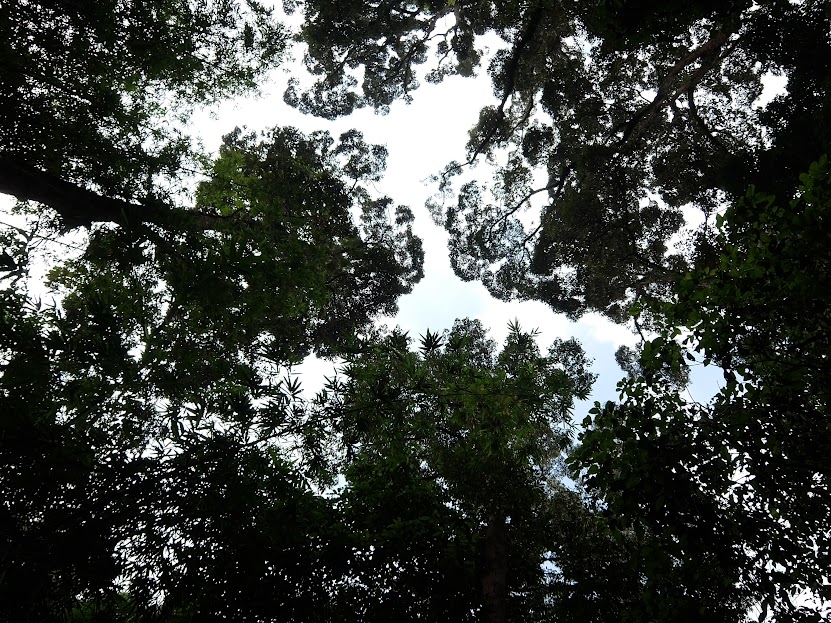 I hiked with Adam, Anis, Devi and Mani and we decided not to rush our way up. We would do it slow and steady while enjoying the view. We smiled every time we saw CP1, CP2 and so on and so forth, indicating the checkpoints. 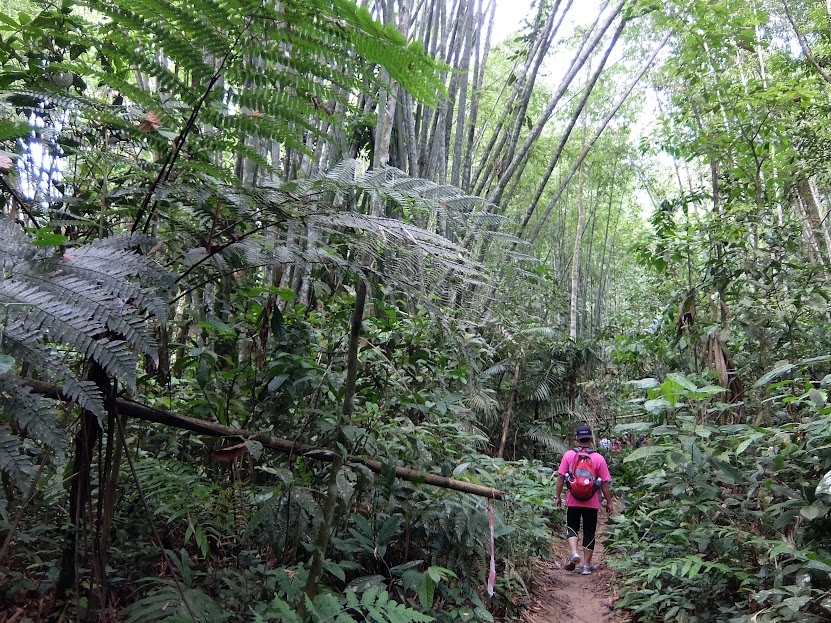 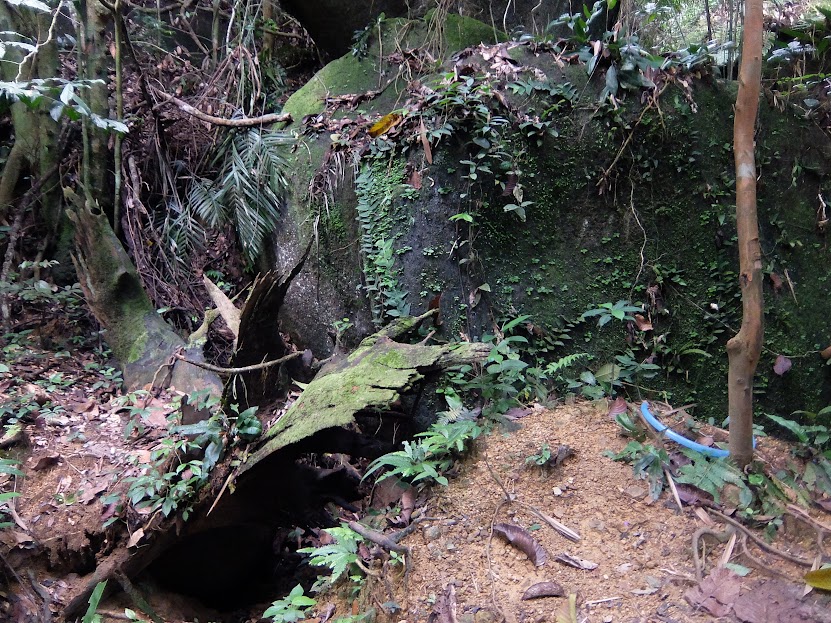 Several days before the hike, I have been reading other blogs to gauge how Bukit Kutu is and when we arrived at a point with WP words, covered in thick moss, I knew that we were halfway through. (WP stands for water point, but unfortunately, there was none when we were there). 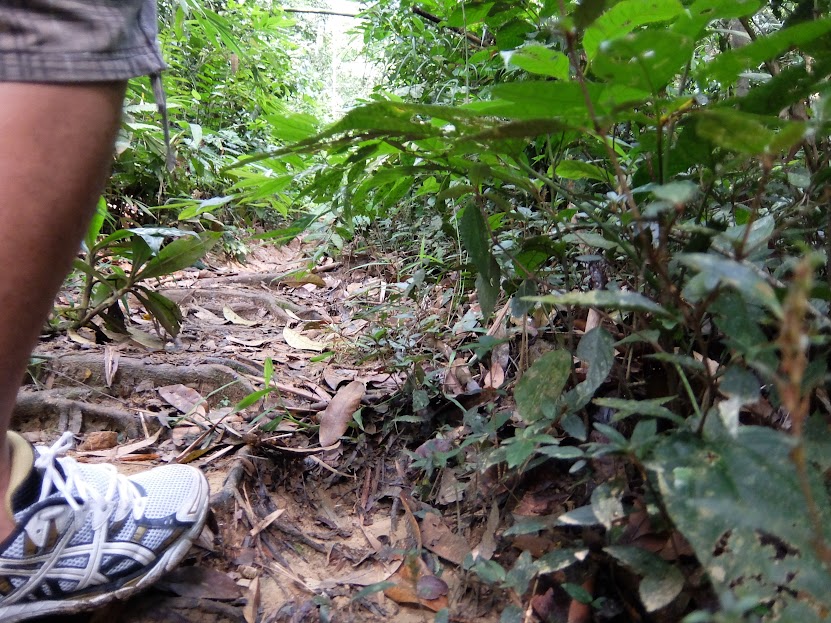 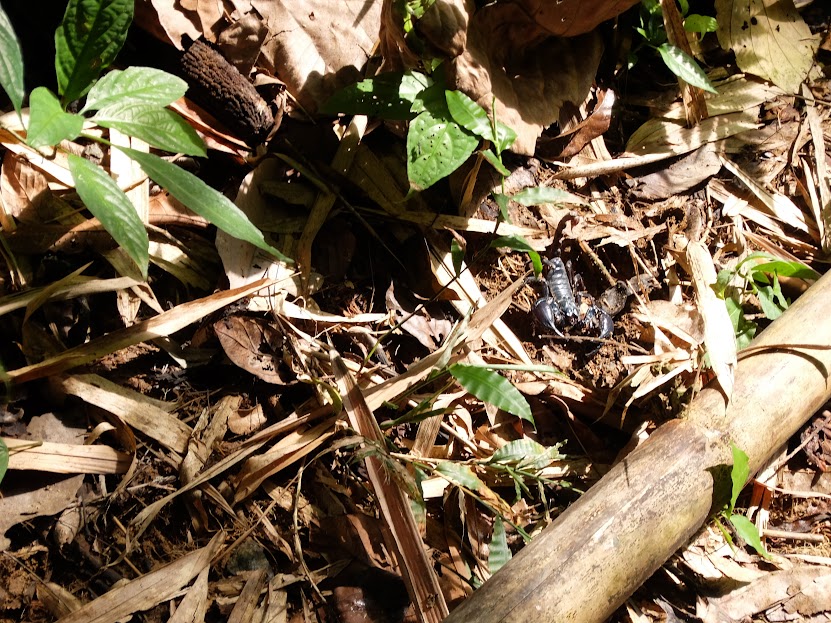 We continued our journey until we arrived at Batu Tedung, one of the checkpoints with a lot of large boulders. 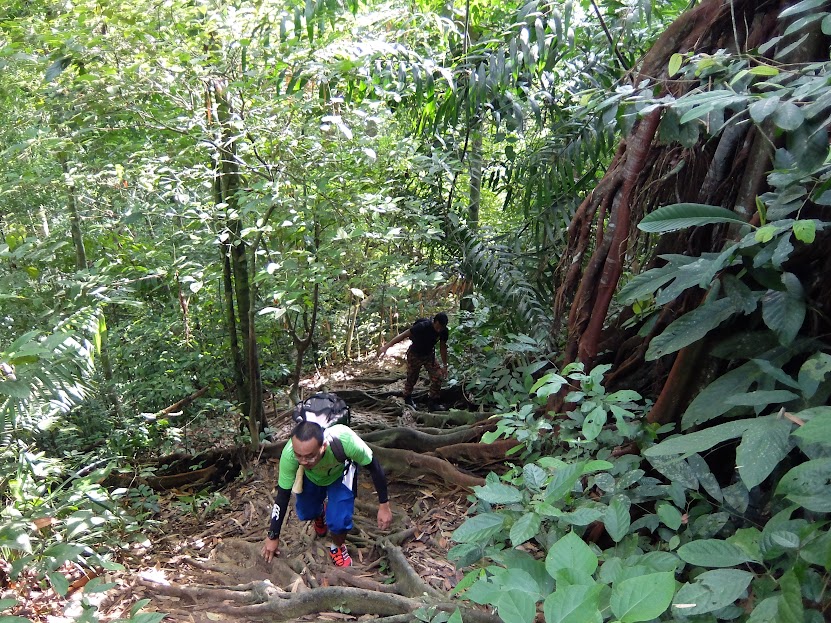 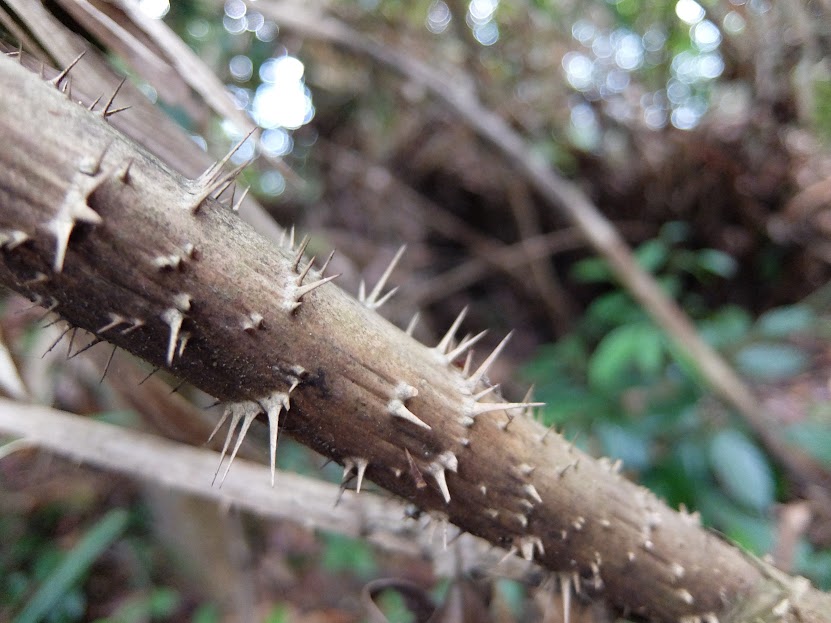 When we arrived there, I could not help but to think of Mount Kinabalu, which experienced a large earthquake a day earlier. Mount Kinabalu has a lot of large boulders too and to think that these boulders loosen up and fell, crashing into some climbers was devastating. I recited Al-Fatihah to the victims whilst resting at Batu Tedung and after a while, continued my hike with the others. 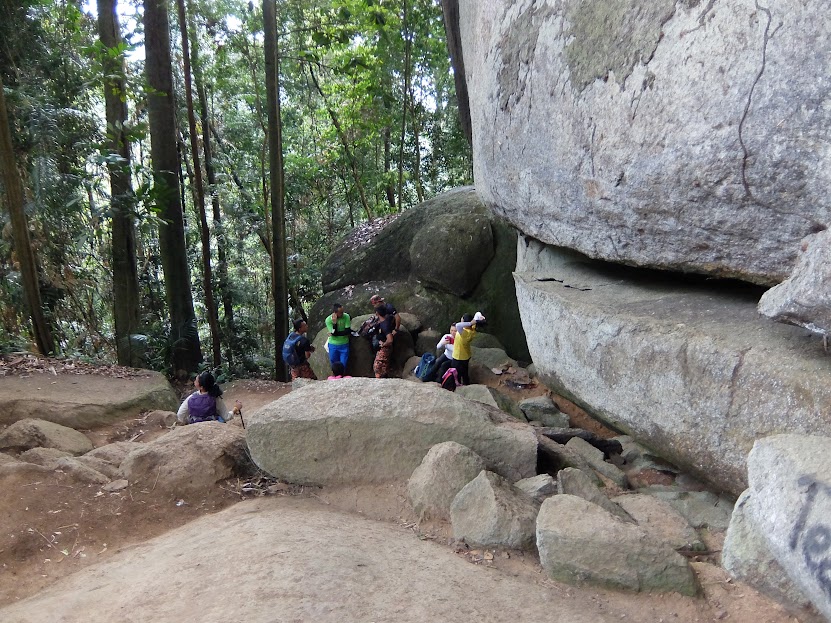 We reached the top around 1.15 pm, around 4 hours since we started the hike. There were a lot of people on top of Bukit Kutu, including a group of Singaporeans under the banner of Singapore Trekking Group. 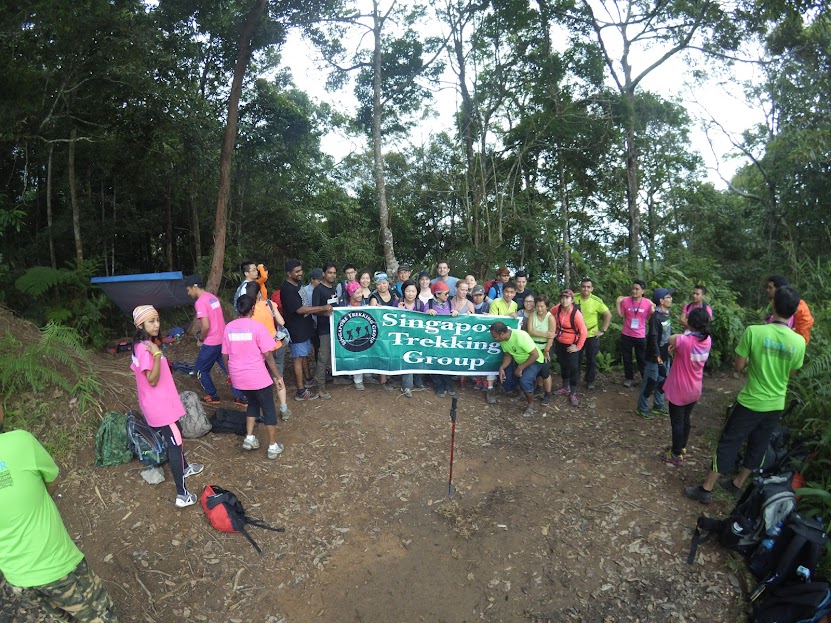 After eating my chocolate bars for lunch, I invited Devi and Soraya to look for the history pieces on Bukit Kutu. 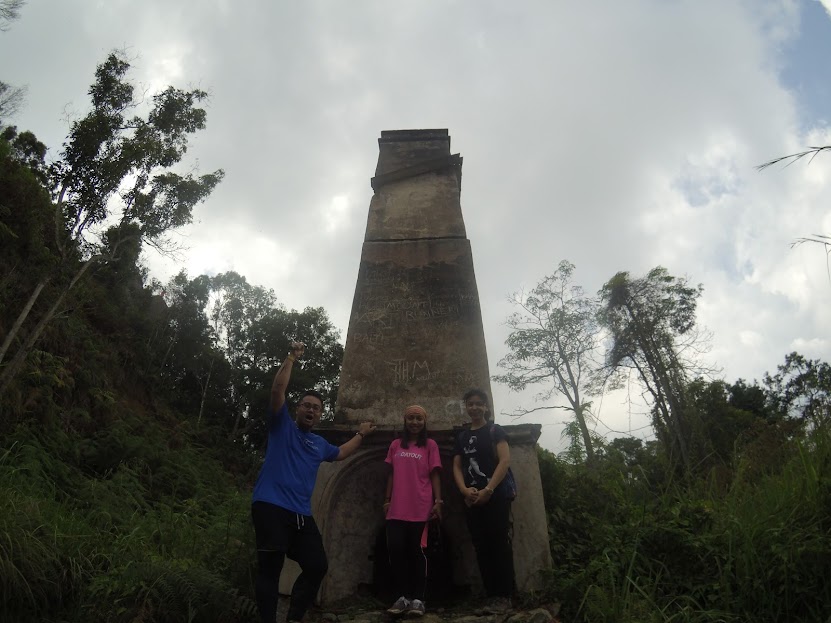 Yes, besides nature, Bukit Kutu is also a historical place. This place used to be a hill station during British era. There  were bungalows built together with tennis courts and other amenities as a retreat for the British from the hot weather. However, the bungalow was no longer there but the remnants – including a chimney and stairs – were still intact. 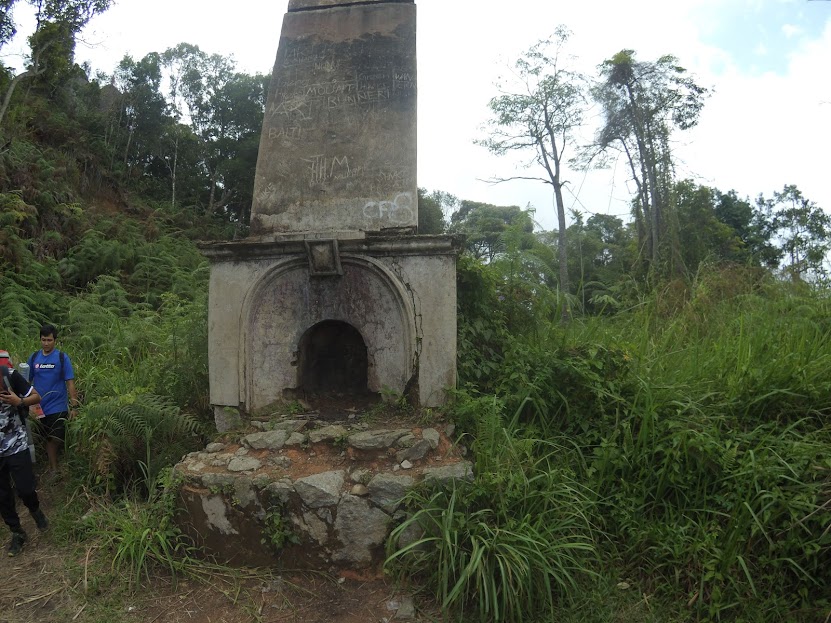 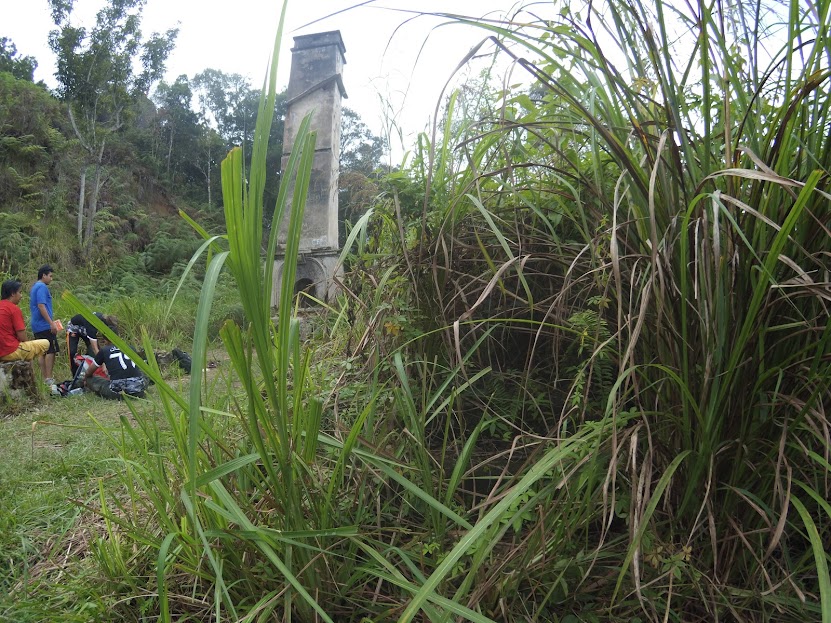 After taking photos and shared some history knowledge, I proceeded to go to the peak of Bukit Kutu, which was a short distance away from the top. There is a signboard indicating the peak and the view from up there was awesome. It was so beautiful, with the clouds and lush greenery intertwining with one another. 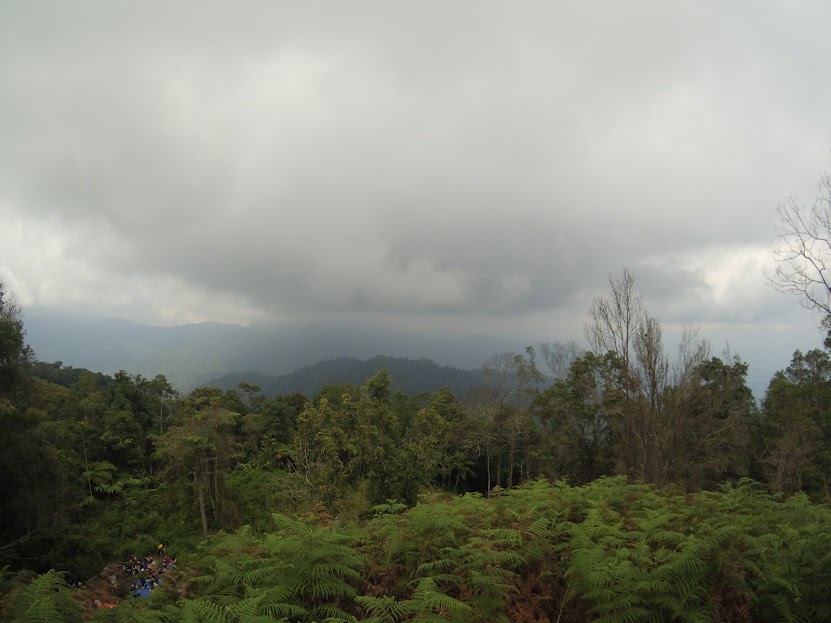 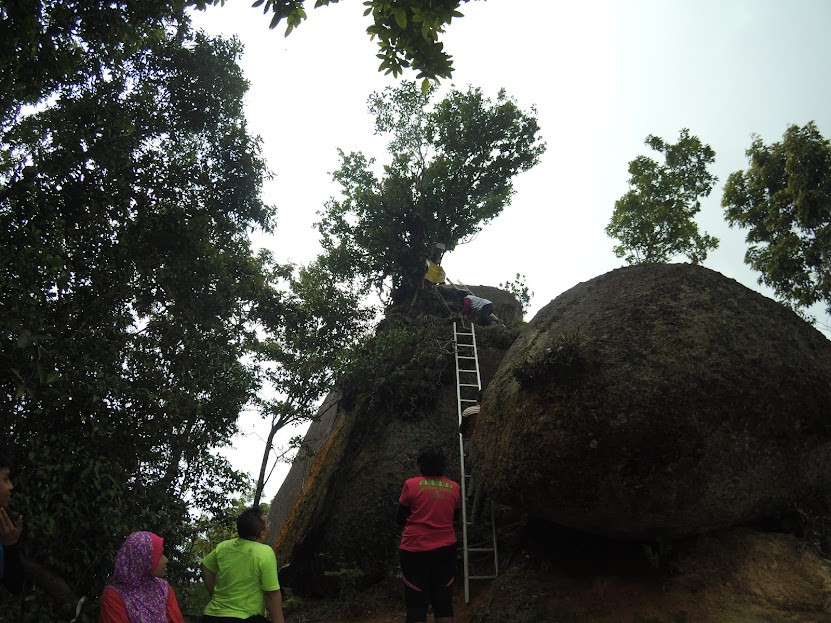 I am not the type of guy who is so afraid of heights but this time around, I felt dizzy after climbing the 2nd out of the four boulders and I gave in. I just sat on the giant rock for a while, looking at the vast view. Although I did not reach the highest point, I was so proud of myself  because I managed to conquer Bukit Kutu. 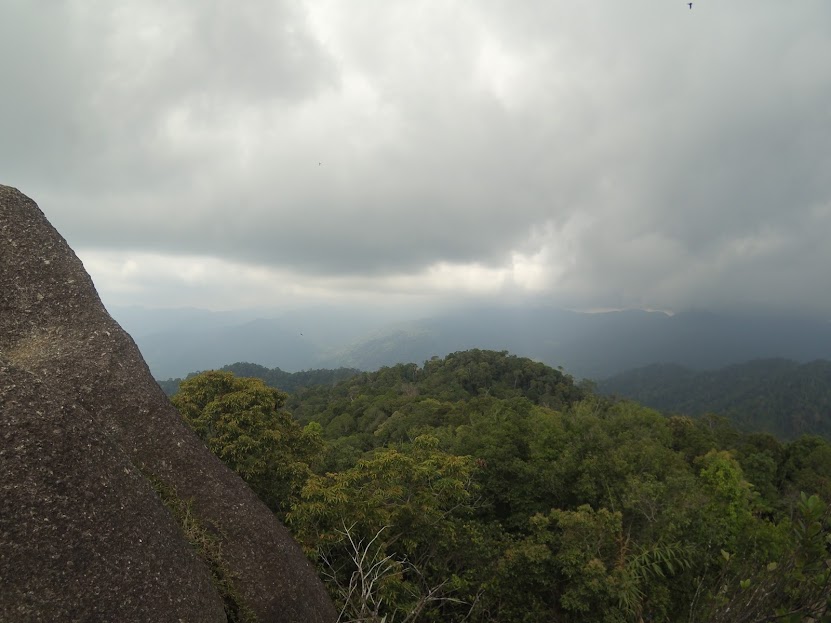 We spent some more time at the top before starting our descent at 3.00 pm. Whilst going down, heavy rain started to fall and we were drenched in rainfall. It was a short heavy rainfall as after awhile, I could see the bright skies coming back again. However, the path had changed due to the rainfall. It was so muddy and so slippery that I fell no less than 5 times throughout my way down. 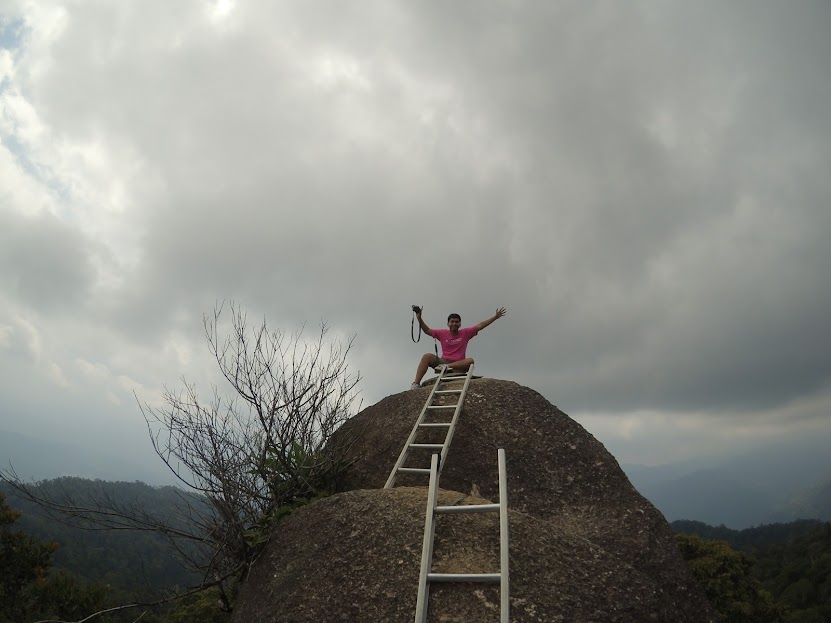 I felt so terrible and at the same time nervous if I would fall down rolling from the top. Alhamdulillah, nothing bad happened and after more than 2 hours of descending, finally I reached the river, which I had made a mental note earlier on. I found Devi there, sitting on the rocks (she left us at some point during the descent) and Adam and I, who reached the river together (we left Anis and Mani at some point during the descent) put our belongings and rested. 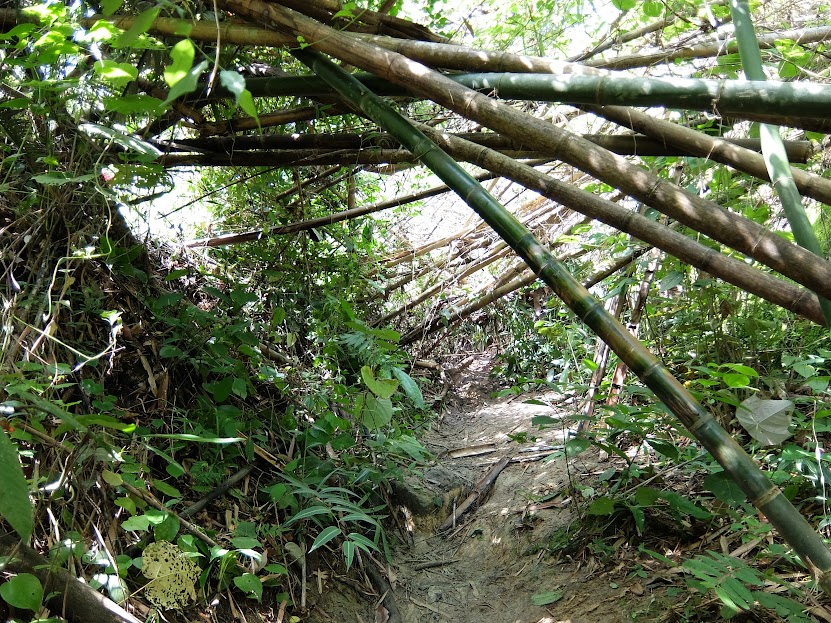 As planned, I dipped into the river fully clothed, rubbing off all the mud on my tights and shirts and boy, it felt so refreshing! I swam in the river and soon, I lay in the river, resting my head on the rock. I thought to myself about this whole expedition – the toughest #tsdayout yet – and how amazing it was to be able to finish the hike and coming down safe and sound. 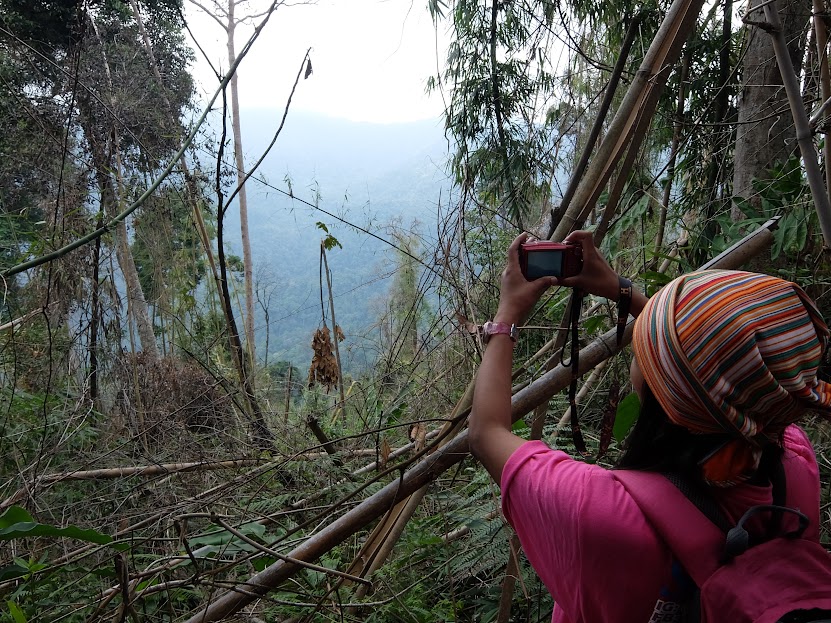 I am a novice hiker and from my not-so-vast experiences, I would say that Bukit Kutu is one of the toughest, yet satisfying hike ever. Gunung Angsi has more steep ascend, but Bukit Kutu is more challenging as it really tested our agility throughout the hike. The fact that there were remnants of colonial bungalow on Bukit Kutu added more colours to the hike.

If someone asked me “Do you want to join me for a hike?”, I would definitely say “Yes!”. Though I regretted my decision to do hiking every time I hiked, I don’t know why I will always say yes for this kind of activity. Maybe Devi was right. She told me that: “Trust me. Although you hate it now, you will want to do it again and will miss the jungle“.

How right she is. I am missing the smell and the sound of the jungle as I am typing this. And how could I forget the calm and chilly river at the foot of Bukit Kutu?

Would it matter to you
If we just took a walk
To see where this path leads to
Maybe stop in awhile
Lay down, see you smile
Looking up at those clouds in view

-America, Walk In the Wood

Bukit Kutu is a mountain near Kuala Kubu Bharu town, on the way to Fraser’s Hill. At 1,053 metres above sea level, it was once a colonial hill station called ‘Treacher’s Hill’. To go to Bukit Kutu, take the PLUS Expressway and exit at Rawang and drive all the way up to Kuala Kubu Bharu. It is also possible to take the KTM Komuter train to Kuala Kubu Bharu station and take a taxi to the foot of Bukit Kutu.

My heartfelt thanks to Tourism Selangor and Hulu Selangor District Council for organizing the event. Follow Tourism Selangor Facebook page and Twitter for updates on future events. #DiscoverSelangor #TerokaiSelangor.