Backpacking to Europe – Part 41: Final Day in Brussels and Europe

If you just reached here and wanted to read the start of our journey, let’s go to Part 1!

I could not believe that today is already our 13th day in Europe. Time flew so fast and we were so unaware that our trip is coming to an end. Our flight back home from Amsterdam would depart at 8.15 pm today. Since it was still early in the morning, we took the tram and went to the city centre, near the Beekkant station. We saw a Kebab restaurant and had a doner kebab there. 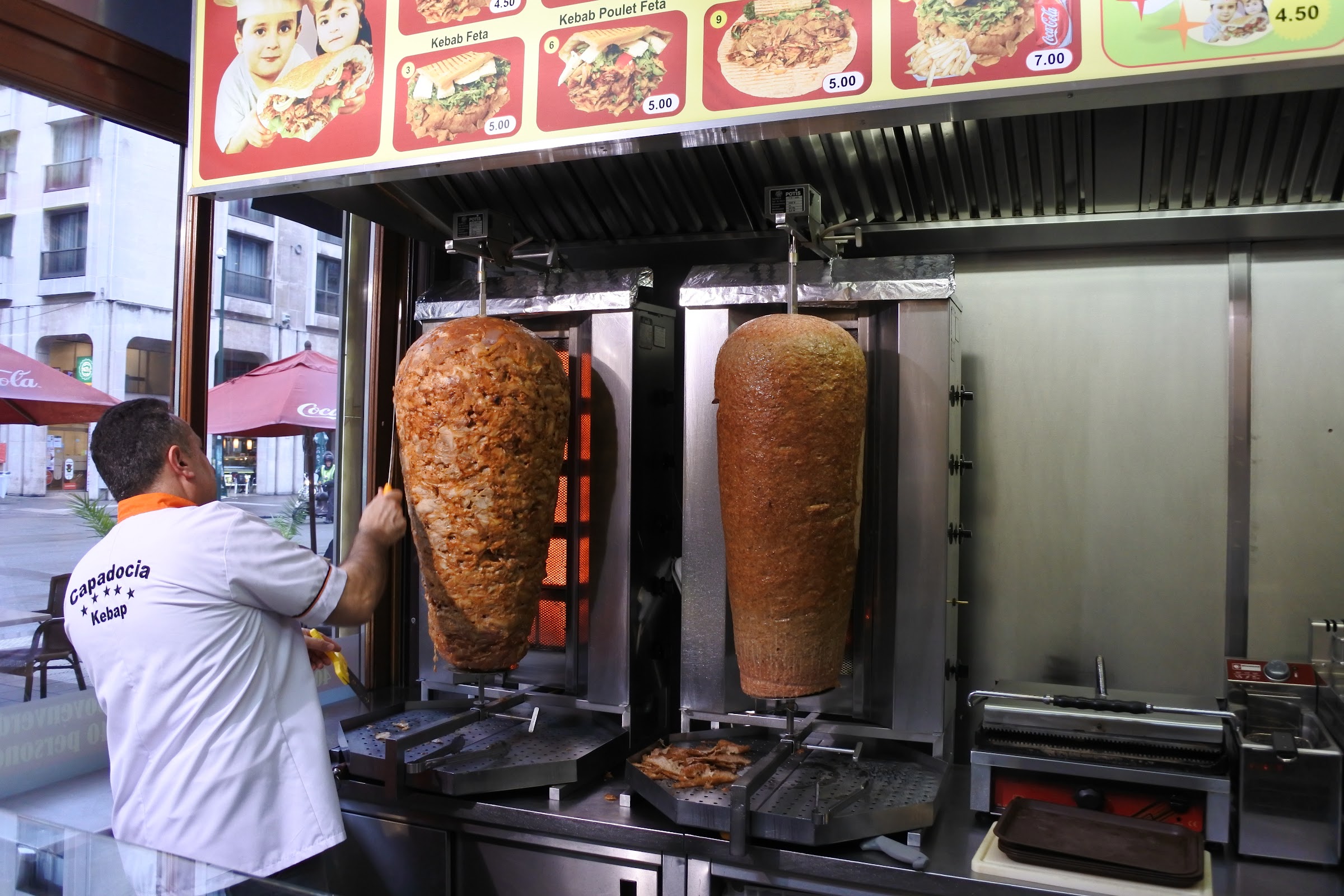 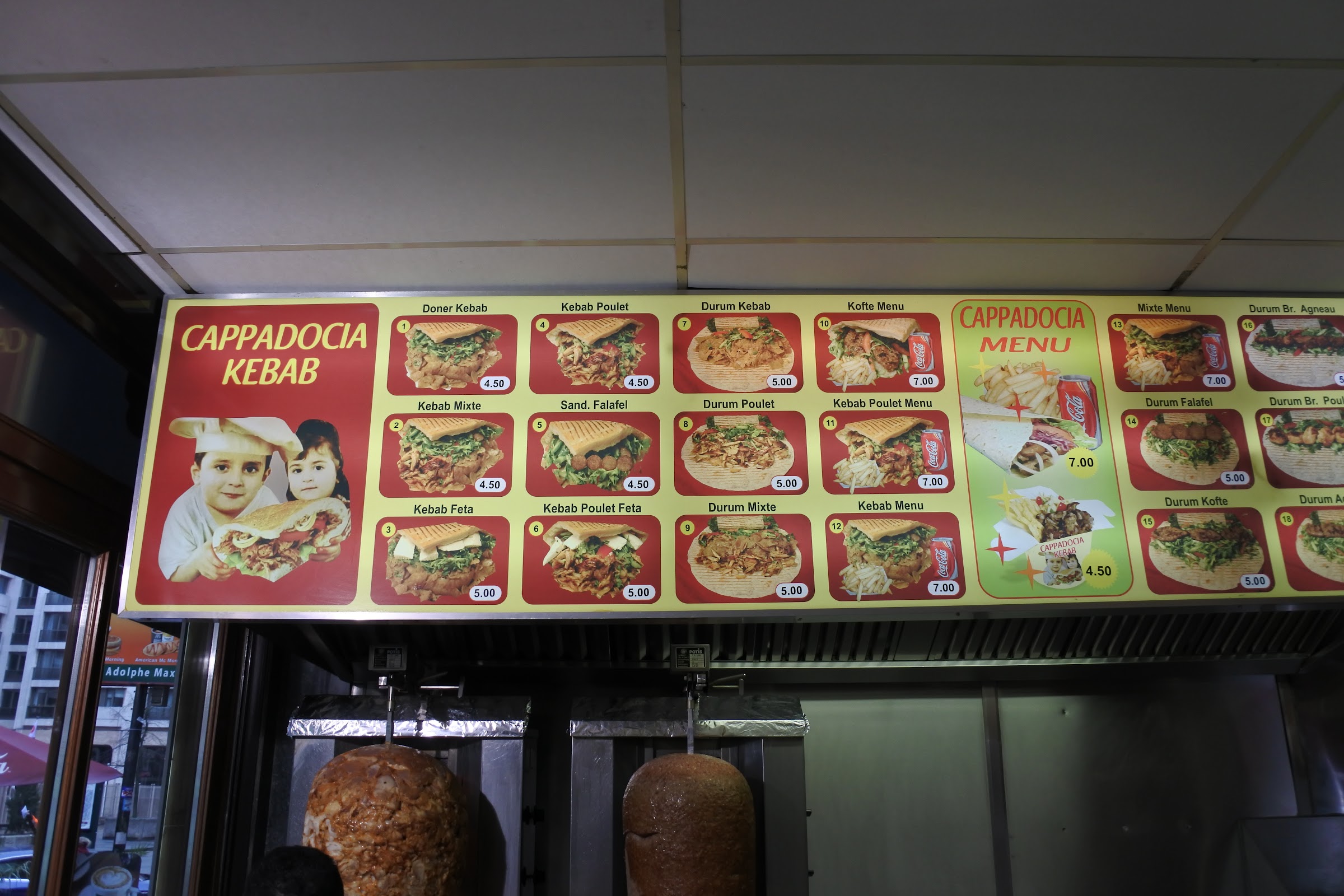 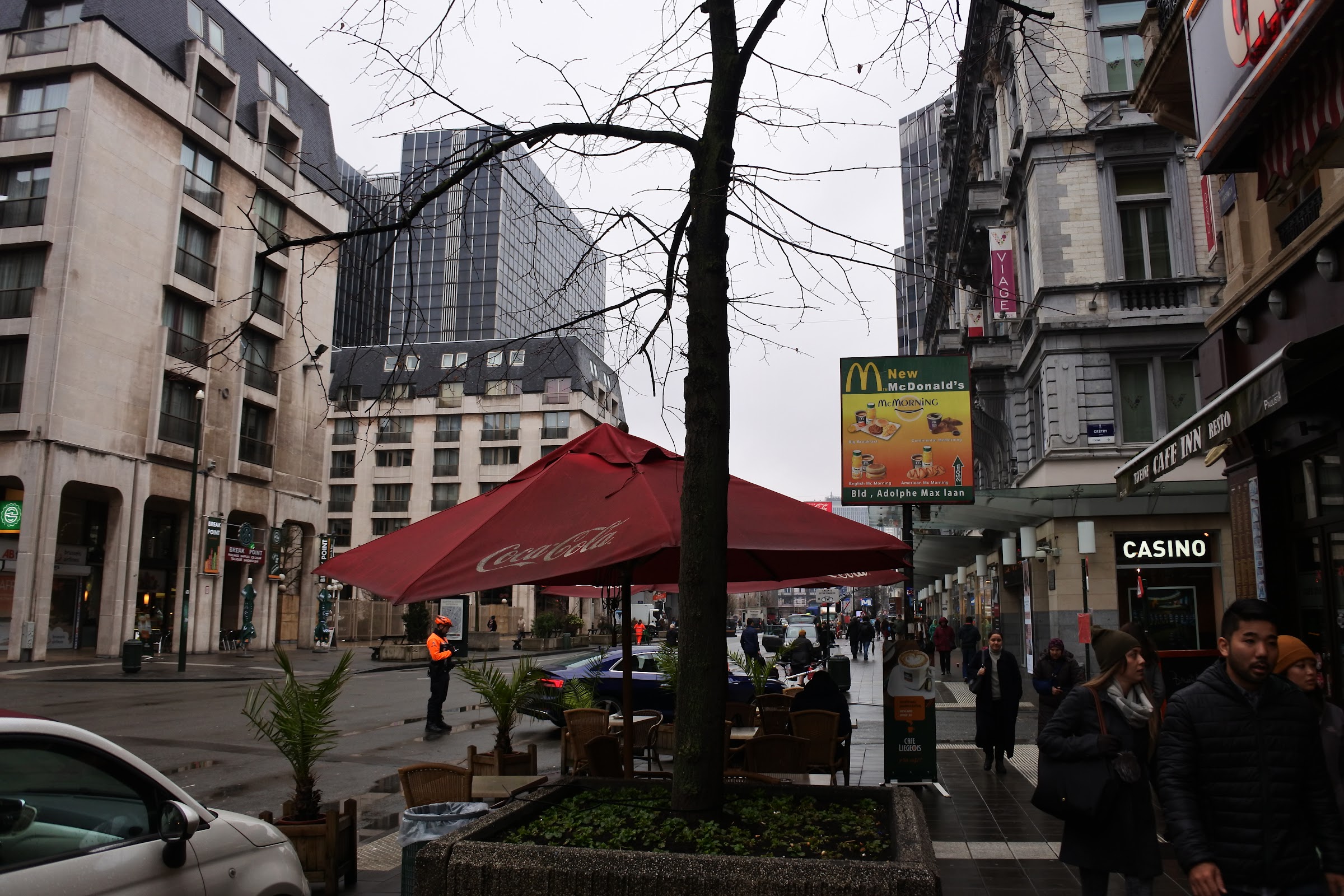 “Do you have doner in Malaysia?“, the restaurant guy asked us whilst preparing our meals. “Yes“, I said and continued “but there were not so many“. “So, what kebab do you have there?“, he asked further. “Shwarma?“, I said, plainly. “Ohhh, Arab kebab no good. Turkish kebab… goooood!“, he said while showing the thumb up sign. He served us our doner and we ate them deliciously. 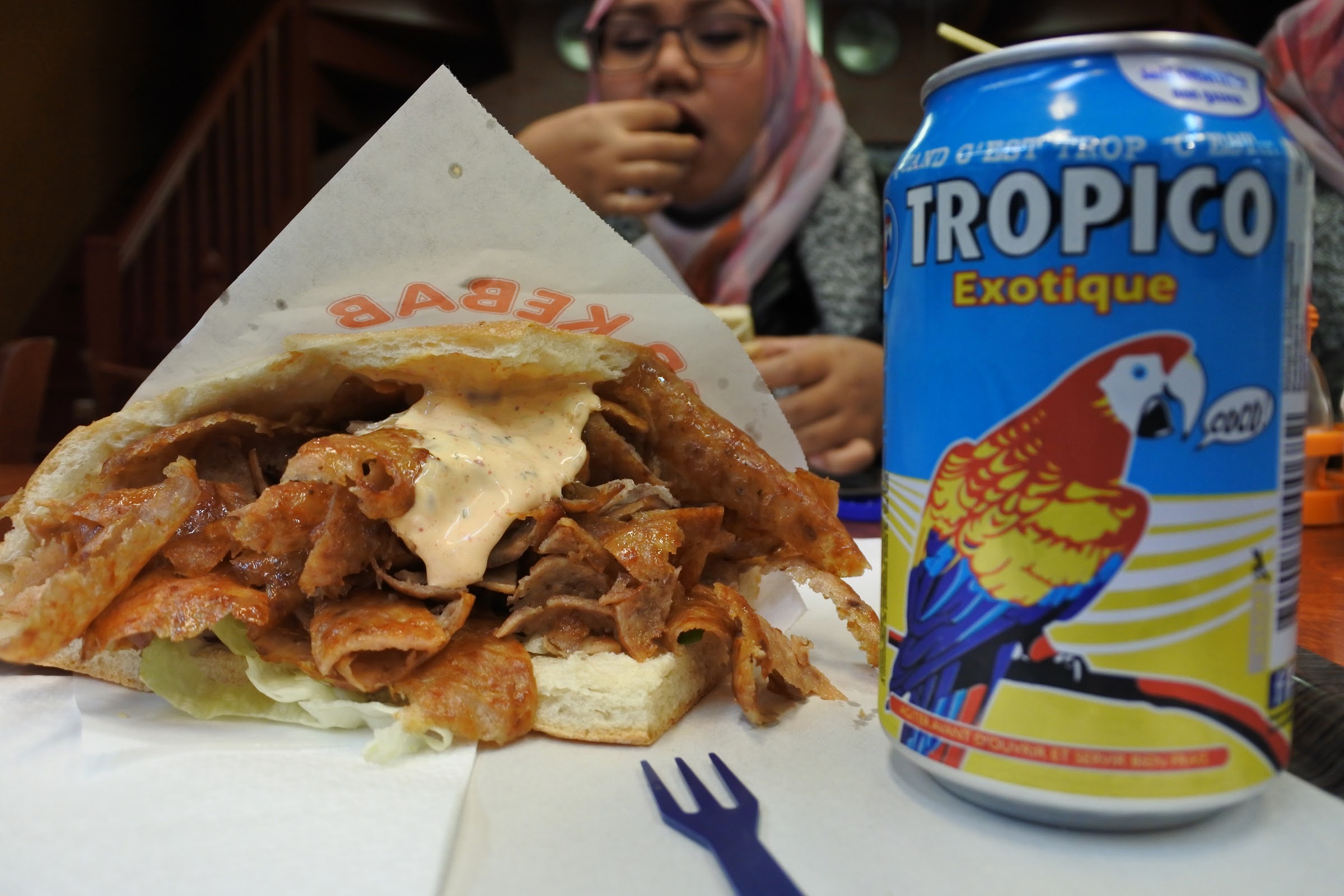 After we were done with our breakfast, we walked around the area, into a small shopping mall. Funny how empty the mall was and how warm inside the mall. I could only imagine if malls in Malaysia are warm like in Brussels, surely people will not go to the shopping malls anymore. 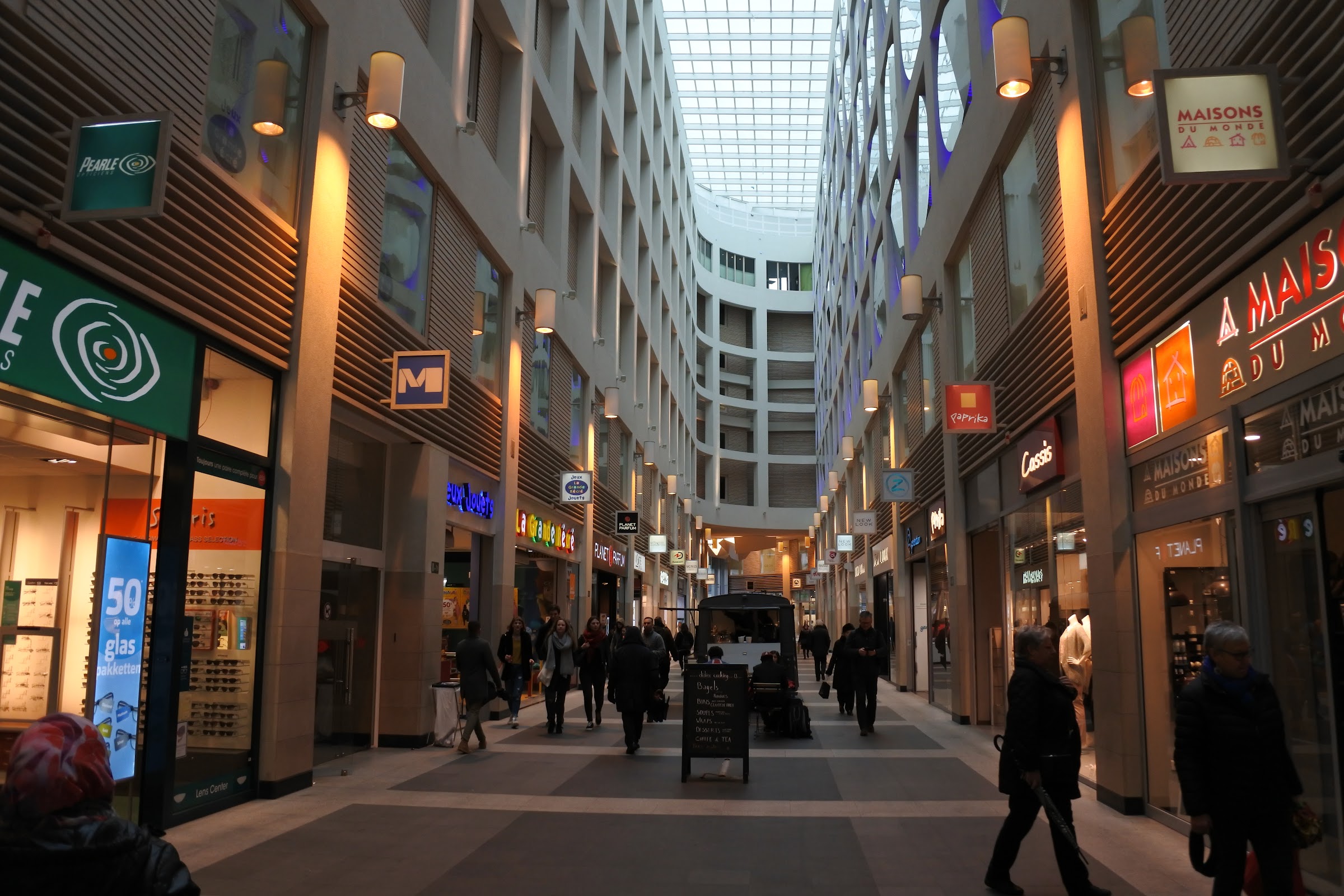 We decided that before we return home, we must visit the iconic landmark of Brussels – the Atomium. Atomium is “a landmark building in Brussels, originally constructed for the 1958 Brussels World’s Fair. It is located on the Heysel Plateau, where the exhibition took place. It is now a museum” according to Wiki. We took the Metro from Beekkant station to Heysel-Heizel station. Atomium is a short leisurely 5-minute walk from the station. 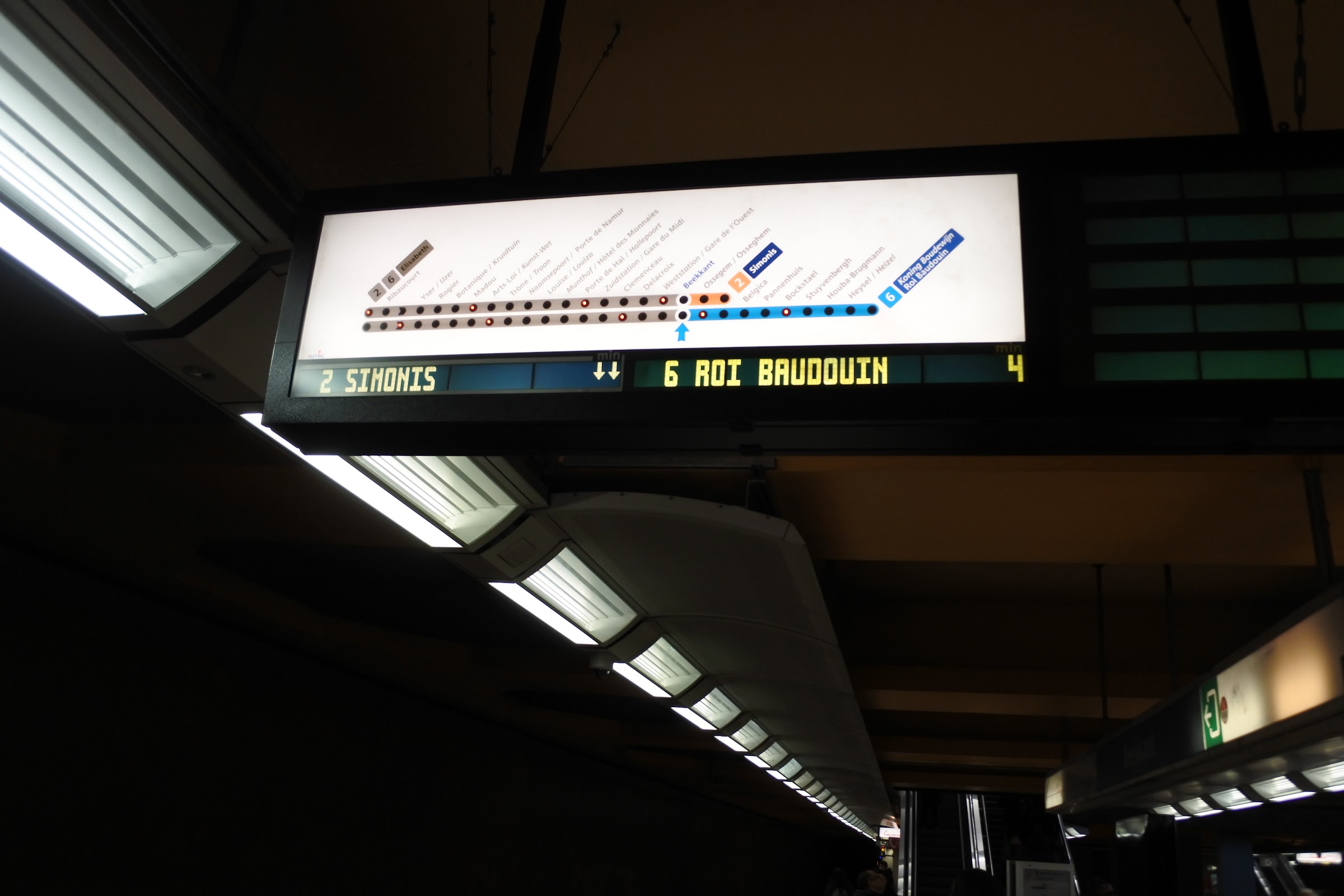 If people come to Malaysia and have a picture at the KLCC Twin Towers, people come to Brussels to take photos at the Atomium. From the outside, as I walked from the metro station, I could see how futuristic the design of the structure is. It was a shame that when I was there, the skies were gloomy. Otherwise, it would be cool to see the atomic particles of the building reflect the sunshine. 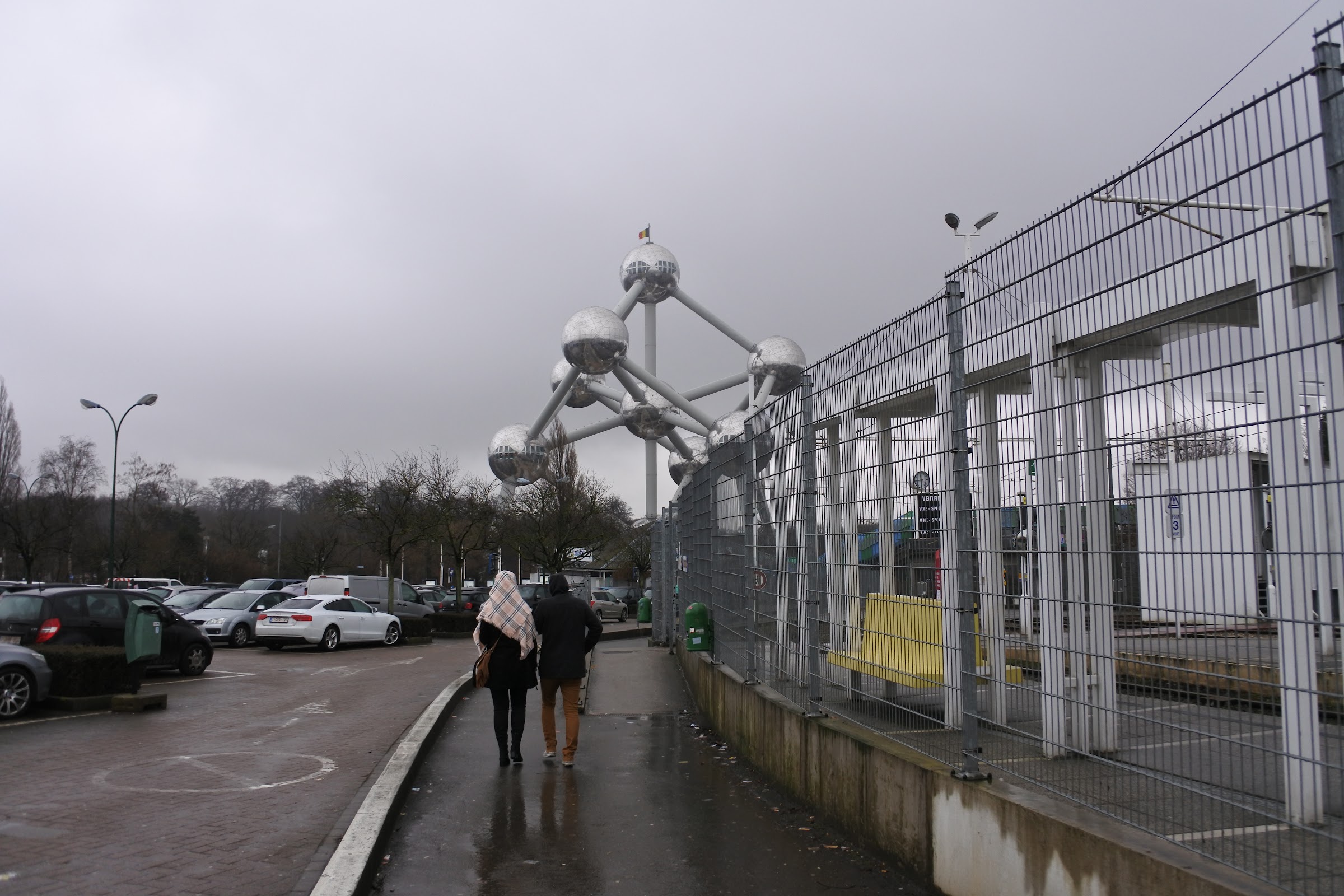 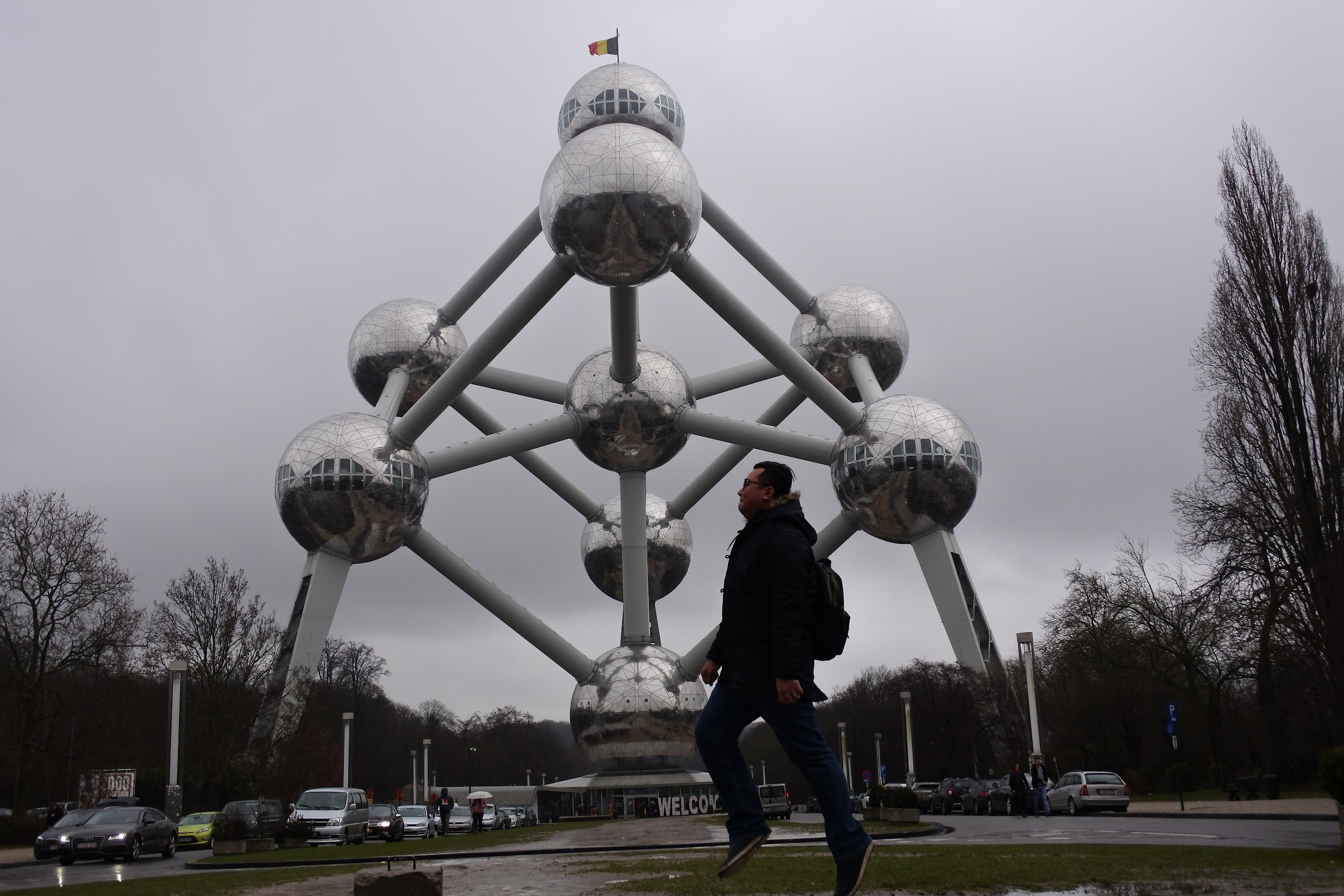 We walked together and entered the magnificent structure. The entrance price was 15 Euro inclusive of a locker to keep our belongings. They have combo tickets too which include a ticket to Mini Europe (like Mini Malaysia – only better). The price can be checked here. 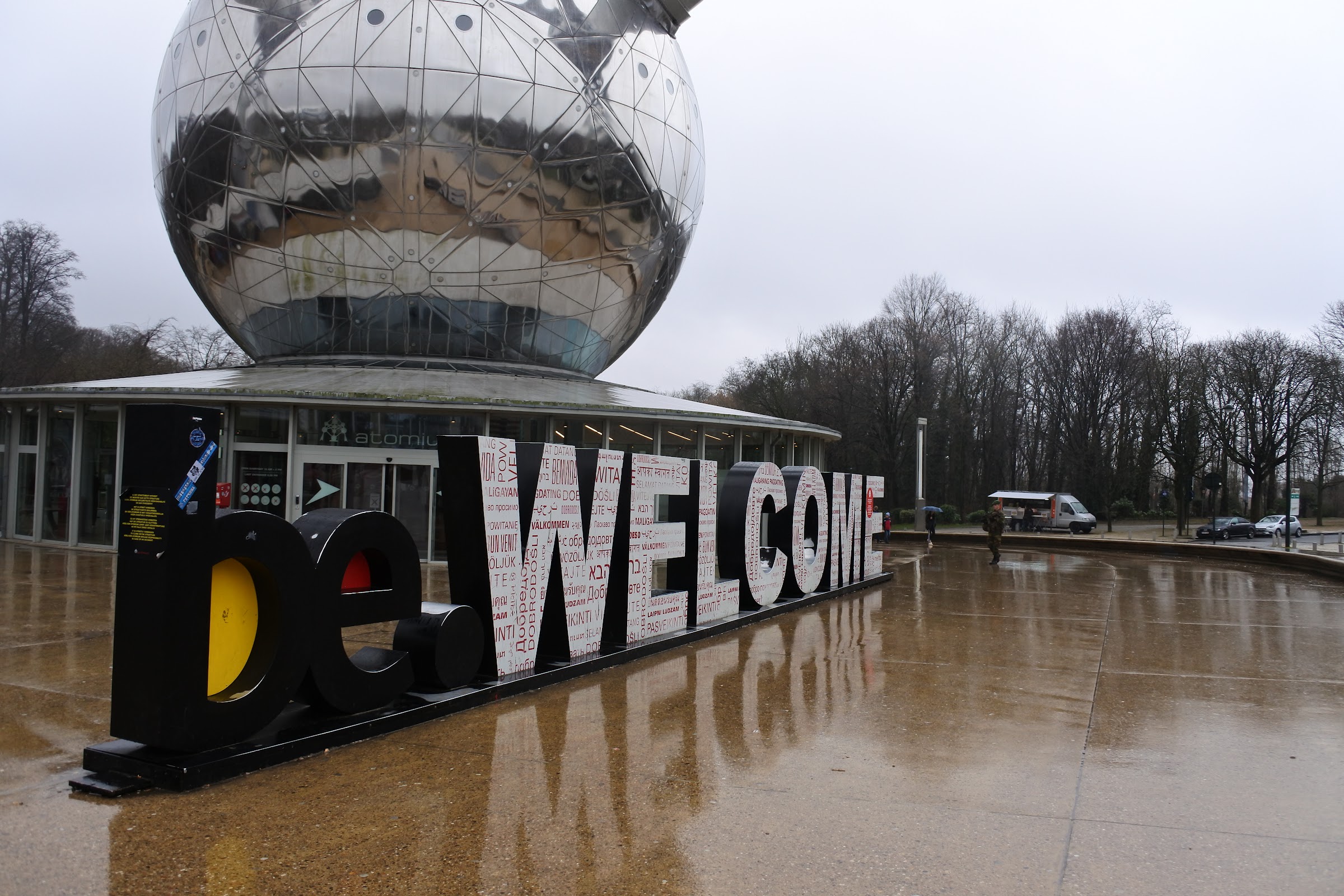 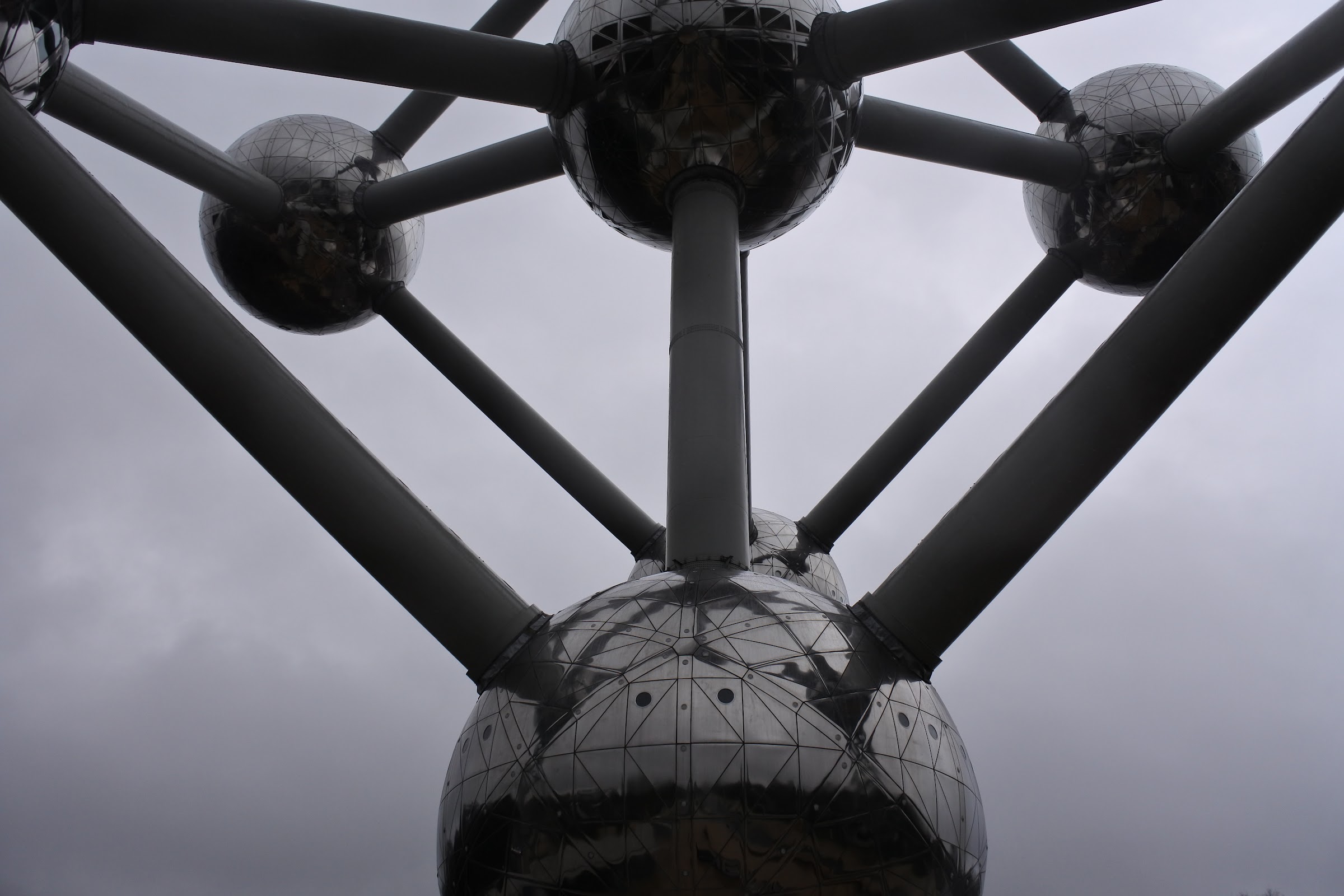 Soon, we found ourselves inside Atomium. The experience walking inside Atomium was surreal. Imagine walking from one ‘electron’ to another, some are connected by escalators while some by stairs. It was bizarre yet interesting. The best part was when it shows where we were inside the building and the opportunity to see Brussels from the inside of its iconic building. 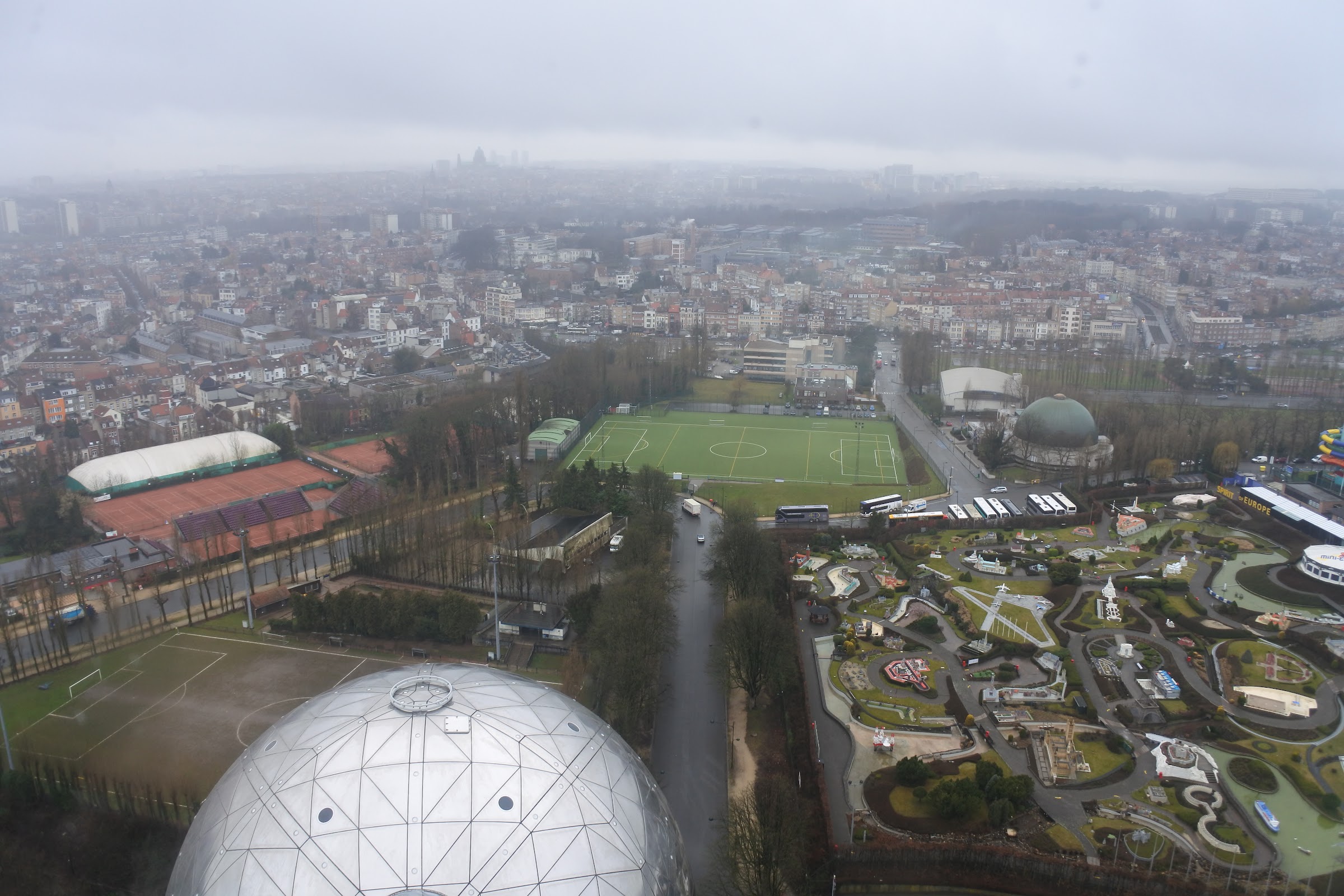 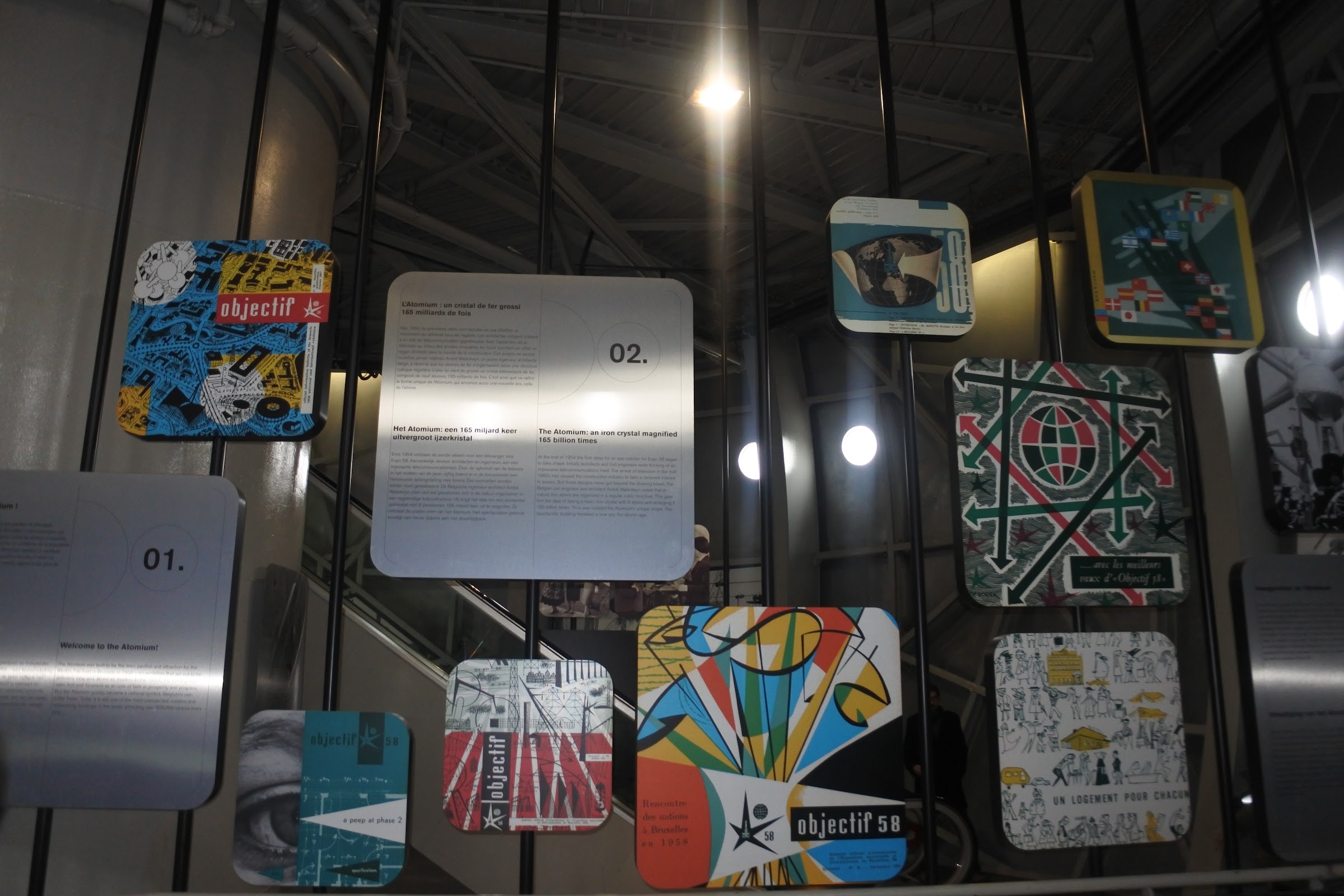 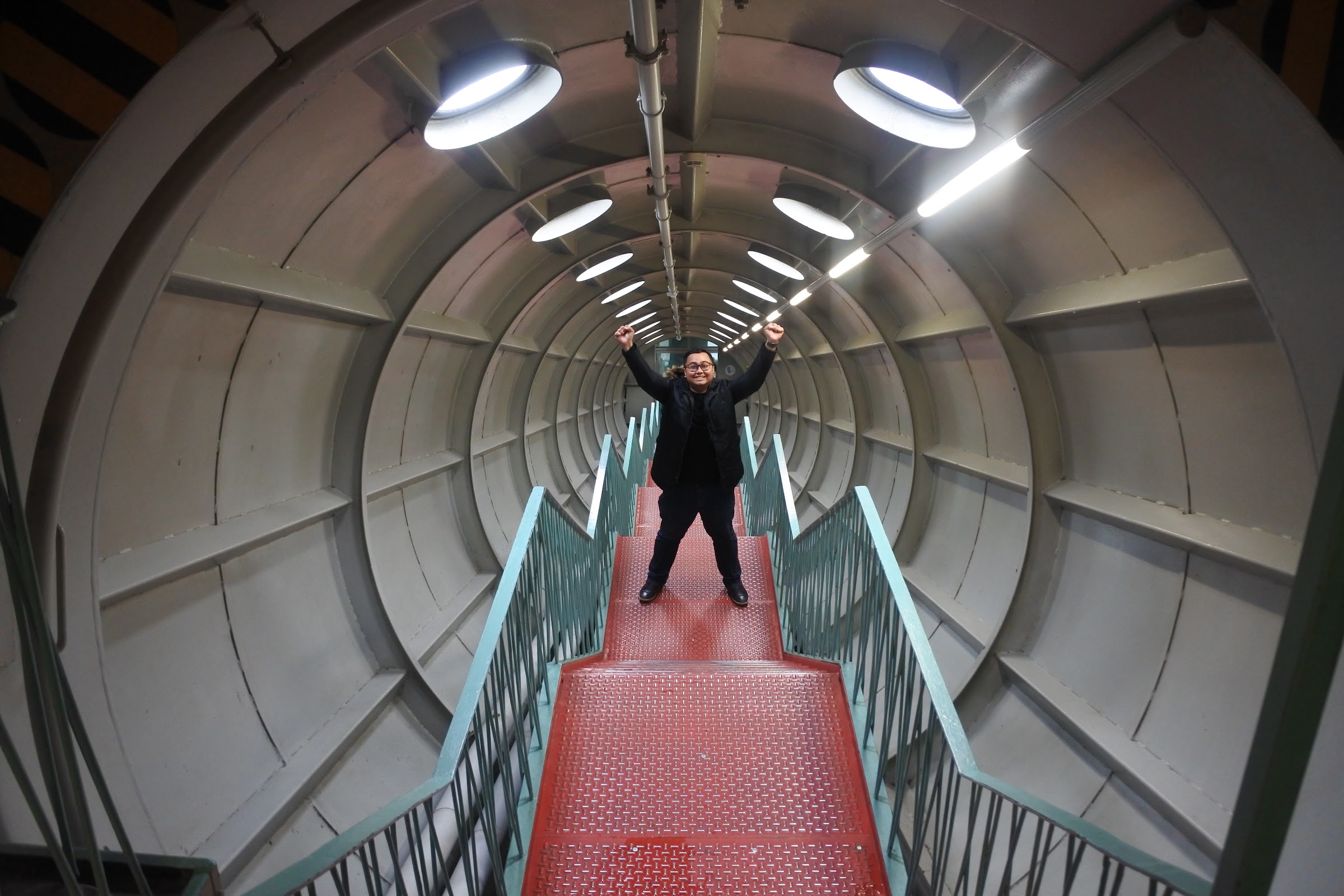 Back to the Hotel

After touring the whole Atomium, we went out of the building, greeted by a drizzle. A drizzle under the cold winter weather was nothing as compared to the sad feeling that in mere 24 hours, we will be back to the other side of the world – to the hot and humid Southeast Asia. We walked along the roadside and saw a van selling hot waffles. We bought two – the chocolate variant and the original variant. The original variant with its 2 Euro price tag was perfect! 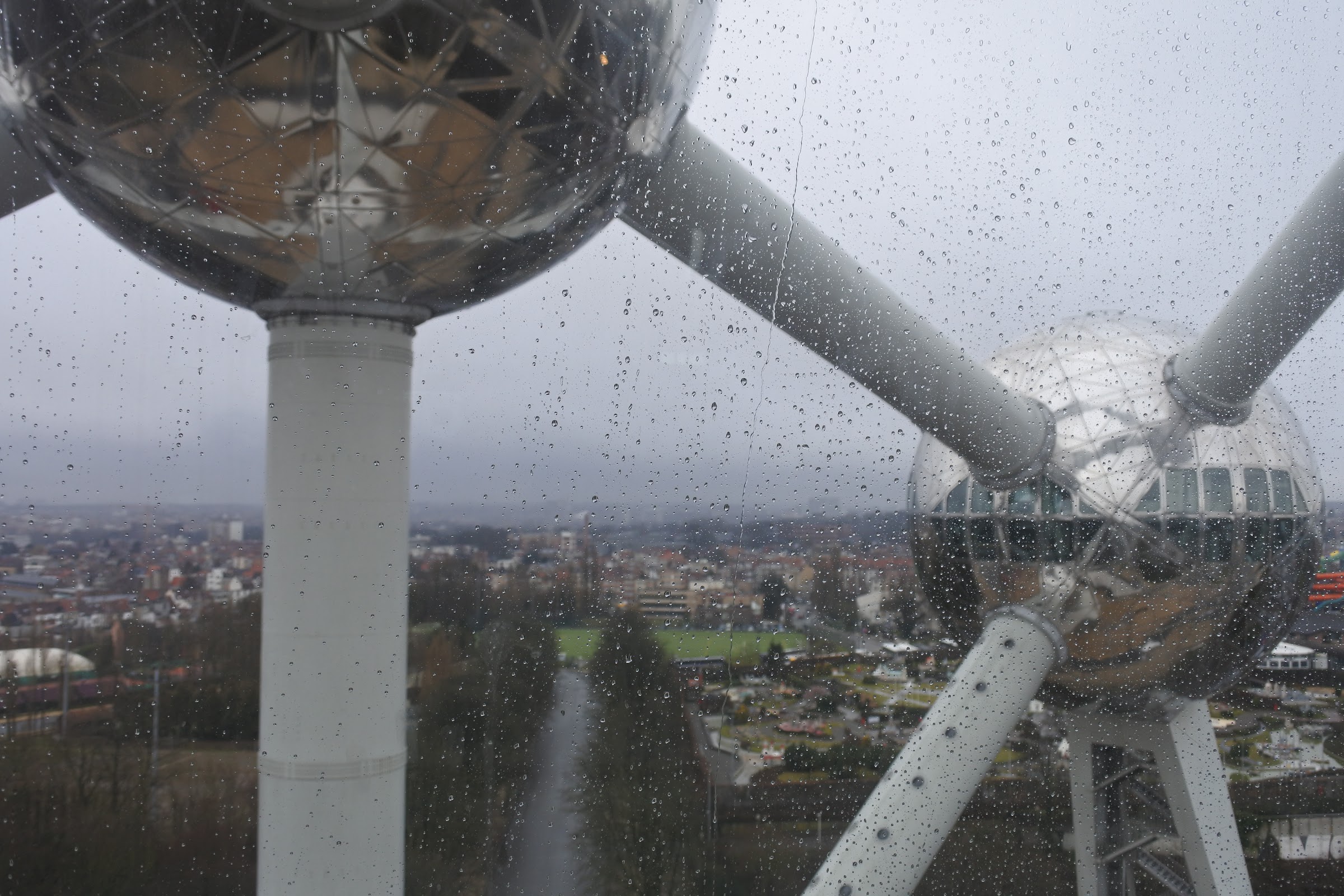 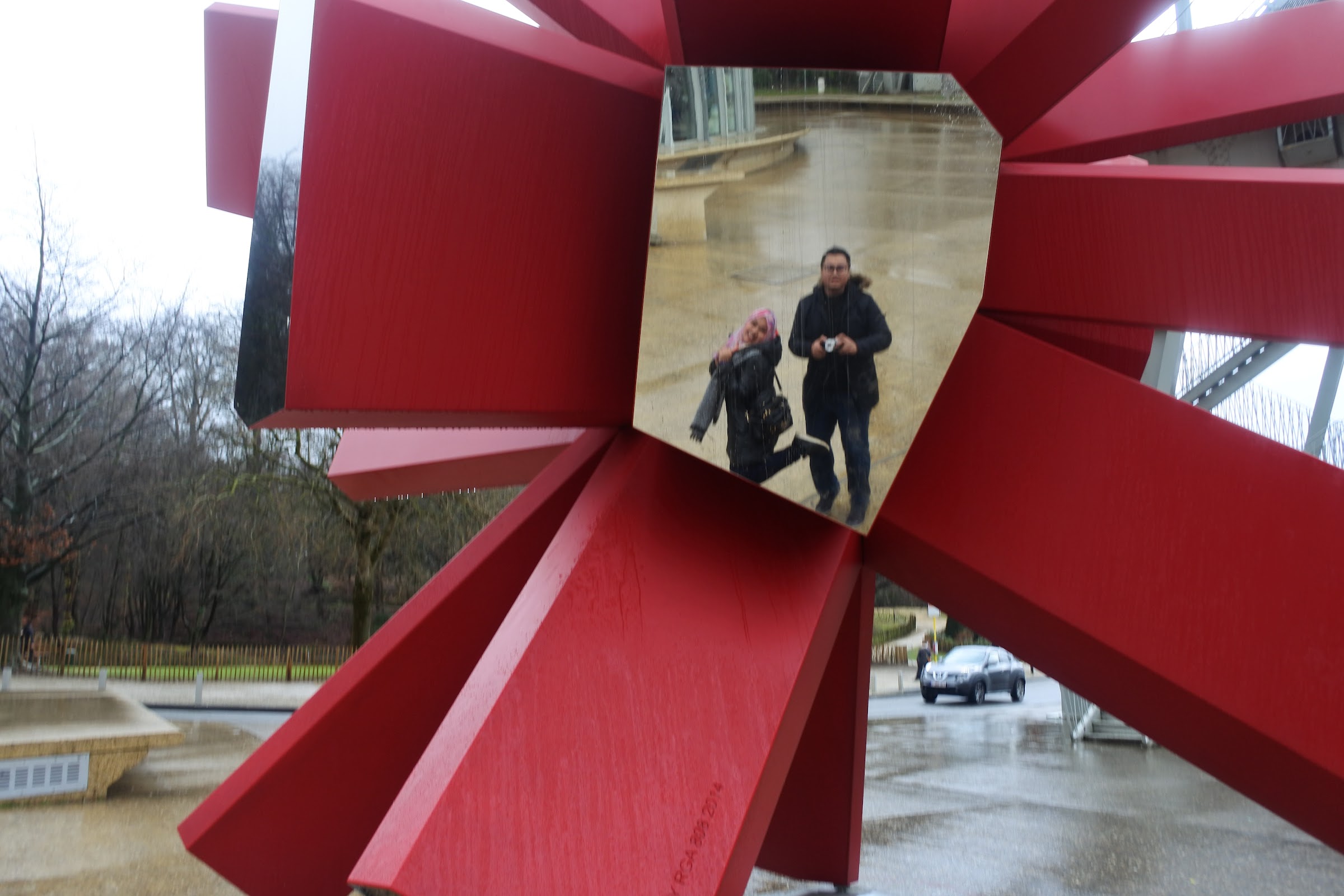 Then, we went back to the Bentley Hotel by taking the metro and the tram. I looked at my watch. It was close to 12.00 pm. We promised the taxi driver that we will be ready by 1.00 pm. When we reached the Parc tram station, suddenly the tram did not move. It has a power failure and had to be towed away. 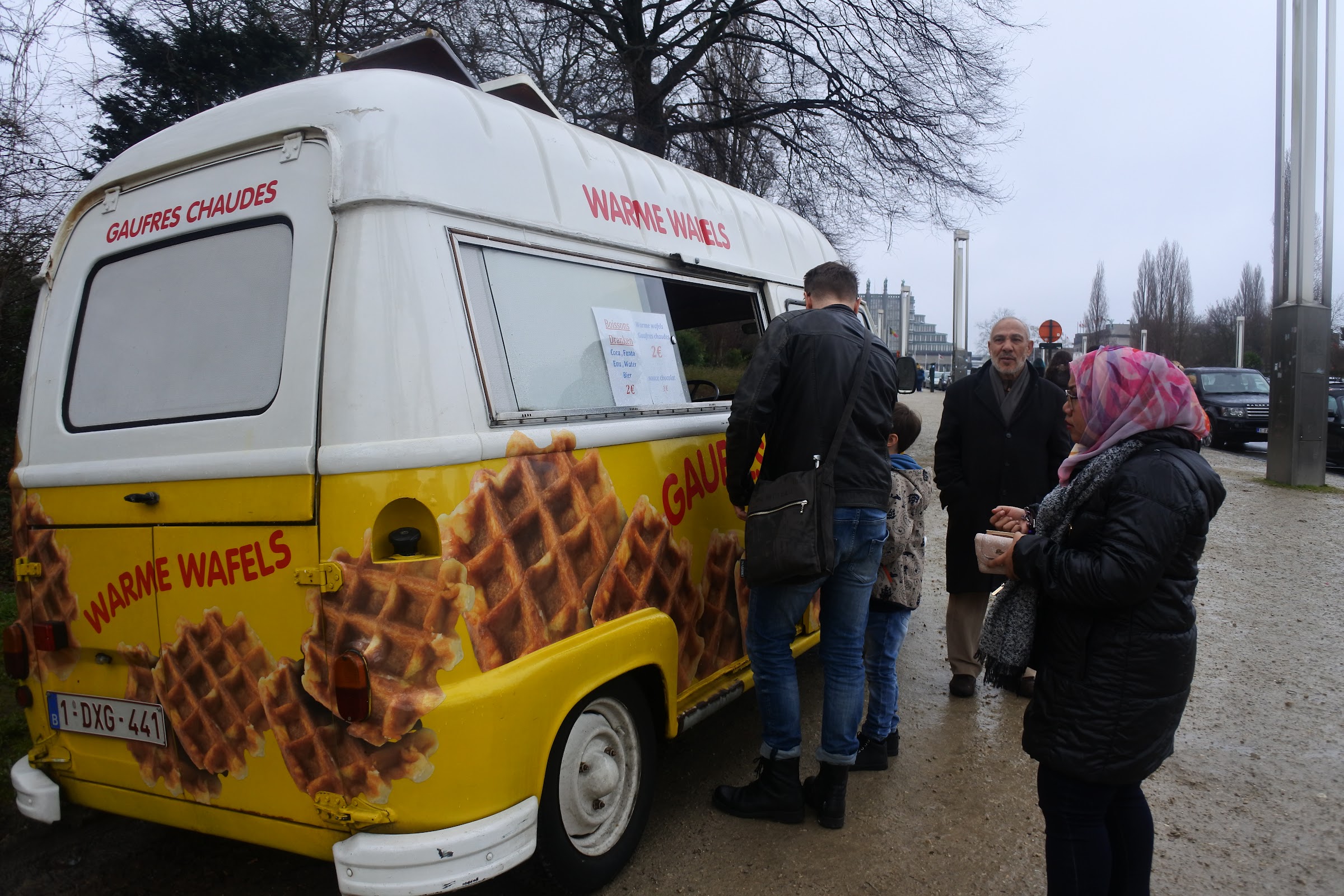 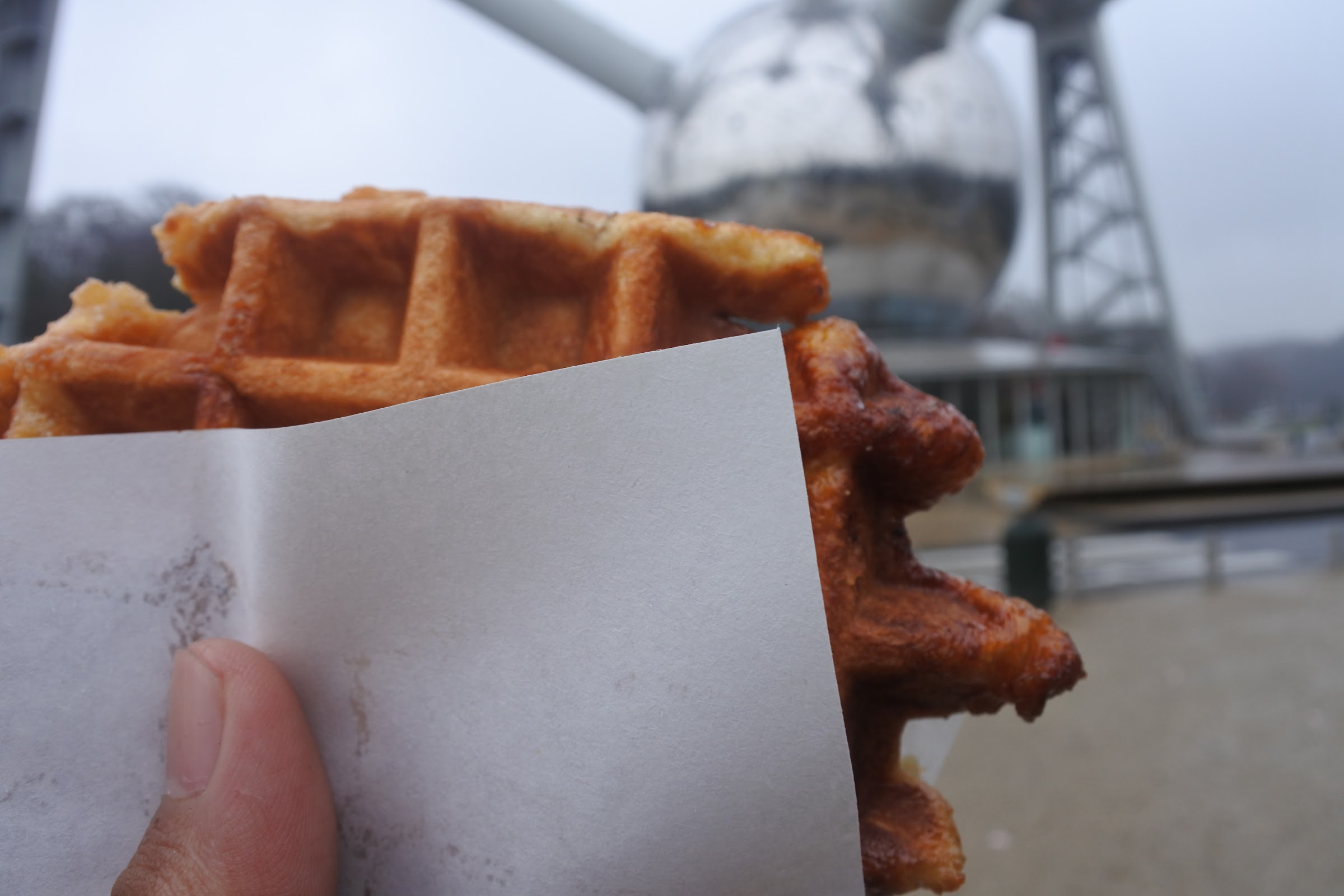 Amira and I thought – This is the problem if tram is to be implemented in Malaysia. Any failure will cause the whole system’s schedule to be disrupted and traffic – both cars and trams – cannot move until the failed tram had been towed away.

We were glad that it did not take long before we could hop on board another tram and went to Bentley Hotel to check out.

To Where It All Began

The taxi arrived sharp at 1.00 pm. He drove us to Bruxelles Midi station and we paid him the agreeable amount. From Bruxelle Midi, we would be taking a Thalys train back to Amsterdam Schiphol Airport, costing us 29 Euros each, which we had paid beforehand. At 2.52 pm, the train left Brussels back to Amsterdam, back to where the journey began. 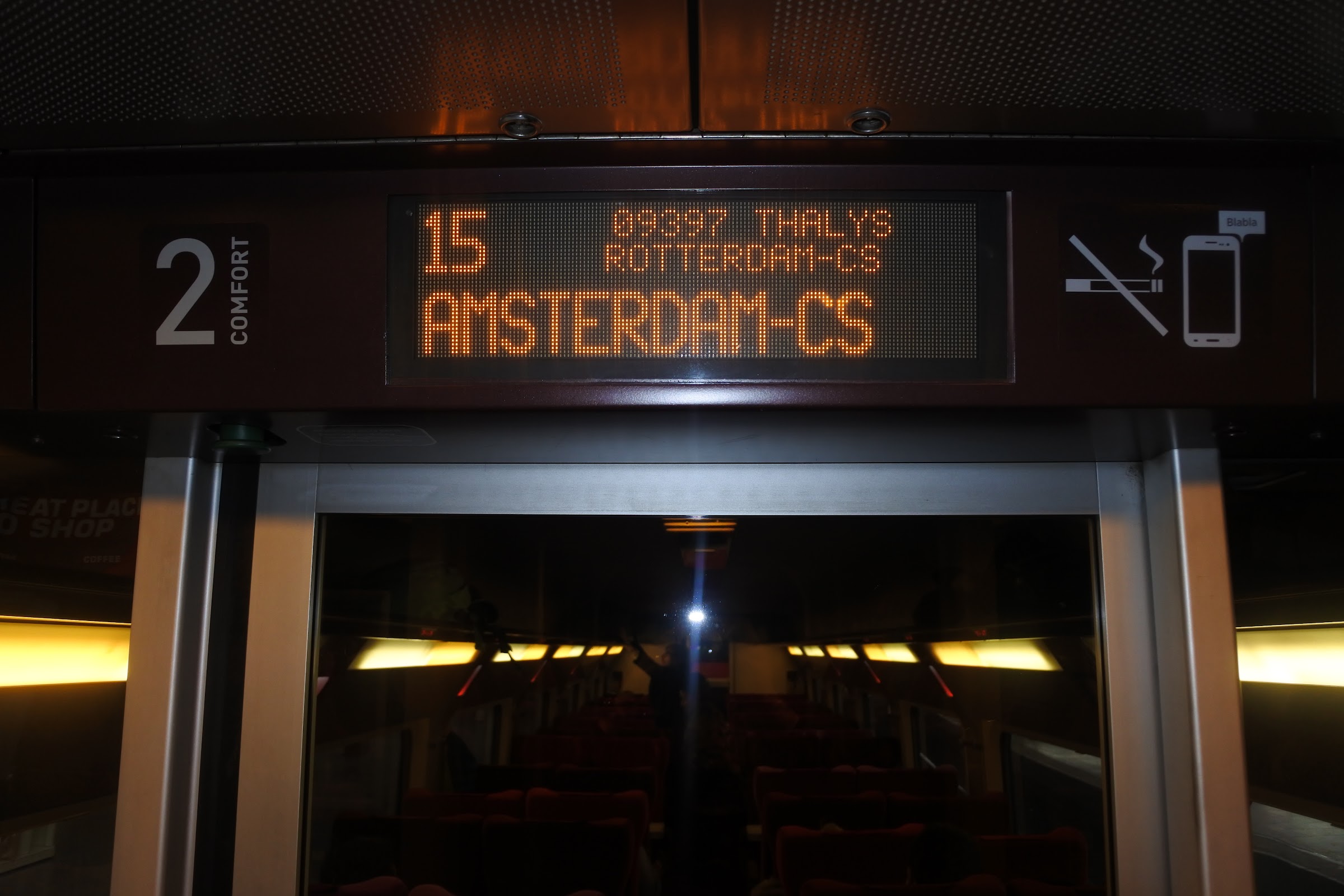 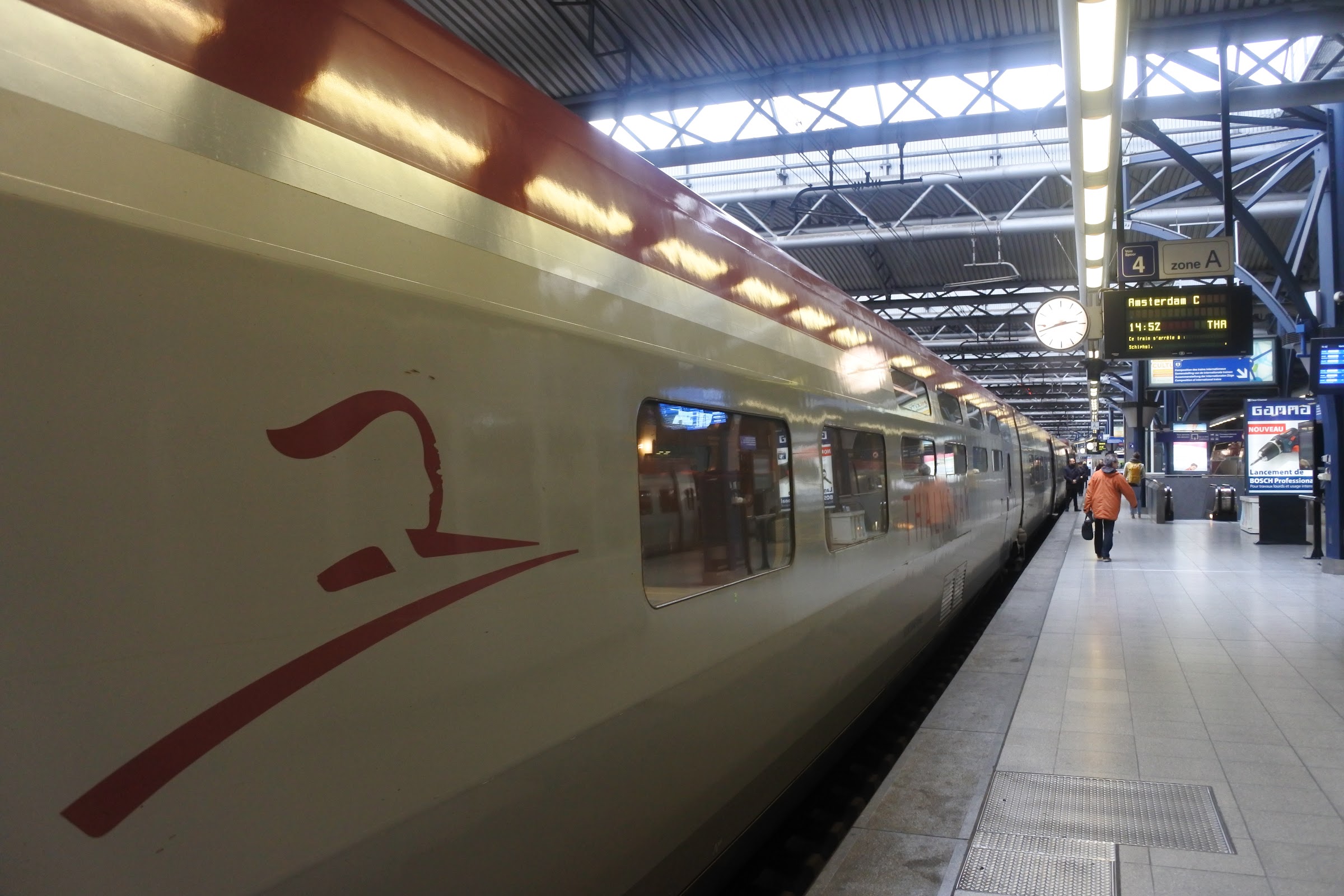 As the train moved towards our intended destination, I could feel something wistful in my heart. It was a mixed emotion. On one hand, I was happy to be back to reality, to be back to my nation, to a country where I am so proud of. Not to forget, to start making money again. On the other hand, I felt sadness for I love the cold weather, I love that for 2 weeks, Amira and I enjoying our time together, day and night, in and out. I love that for 2 weeks, I did not have to think about my work at the office – at all. 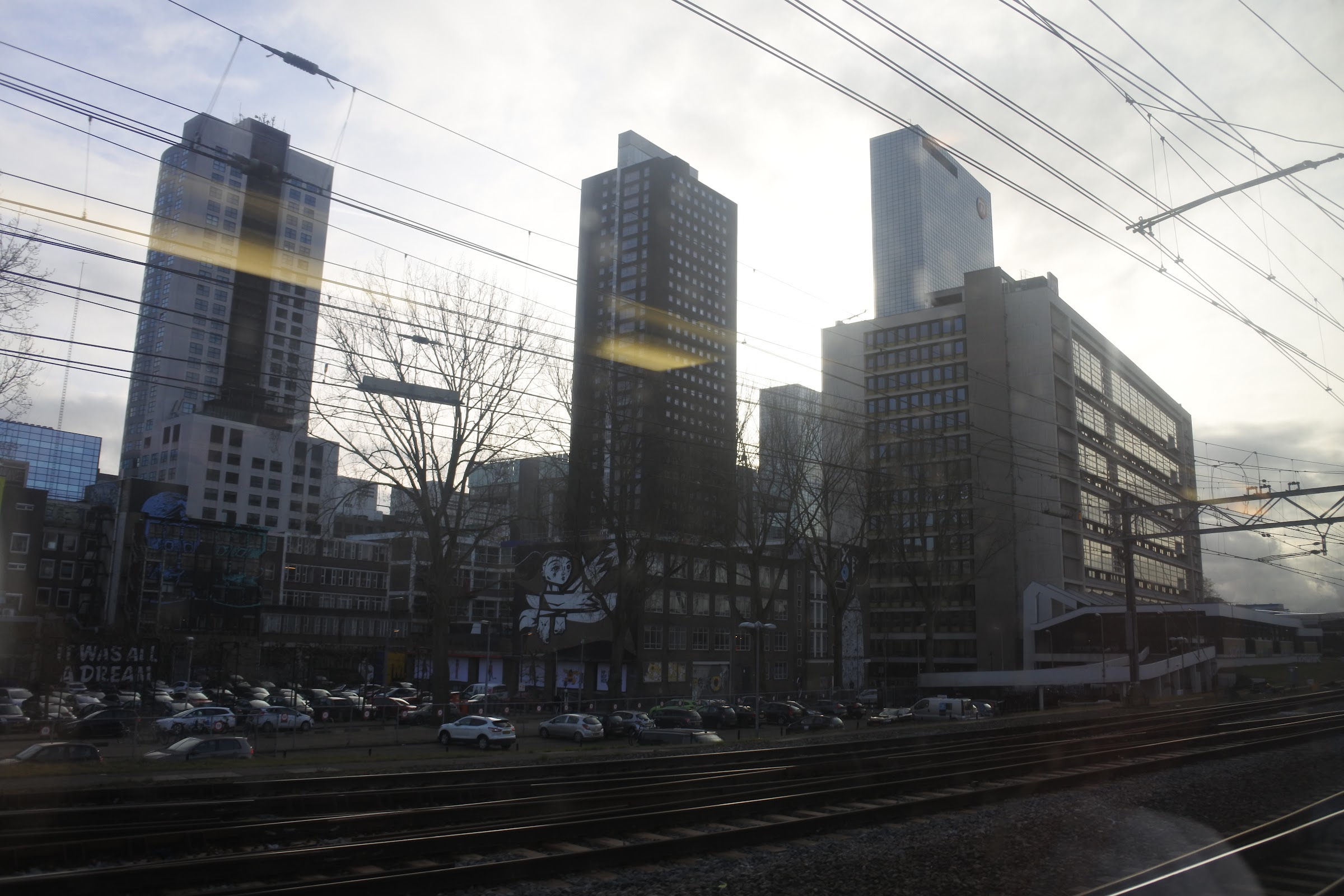 We reached Amsterdam Schiphol Airport around 4.24 pm. t was funny, the time I was here, I felt strange and unfamiliar. Now that my trip had almost come to an end, everything seemed familiar. I could tell how to take the train, which way to go to and I could maneuvered my way easily. 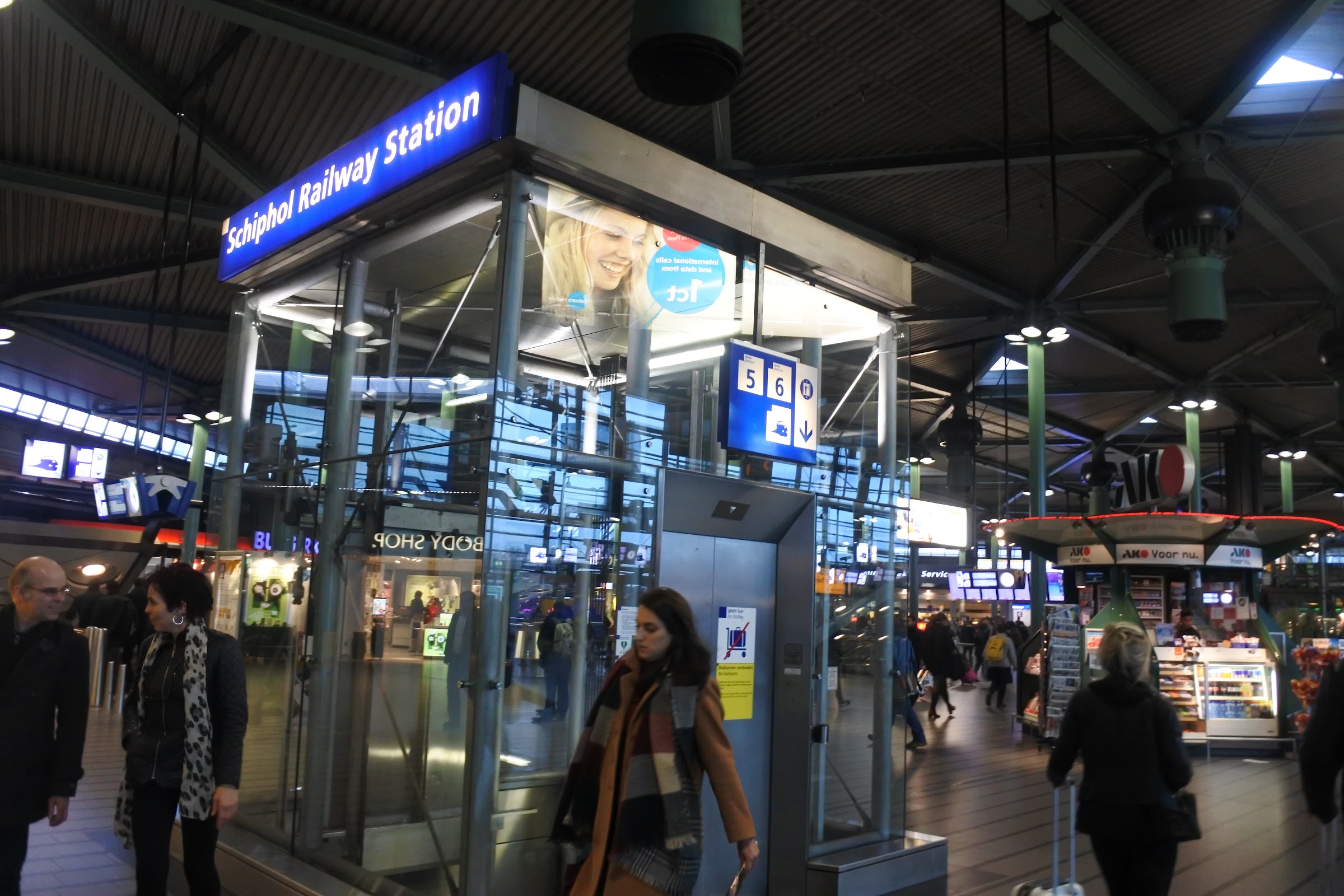 Since we had some Euros left, Amira went into the duty free shop doing some last minute shopping whilst I went outside the airport, enjoying my last moment with the cold and dry weather. 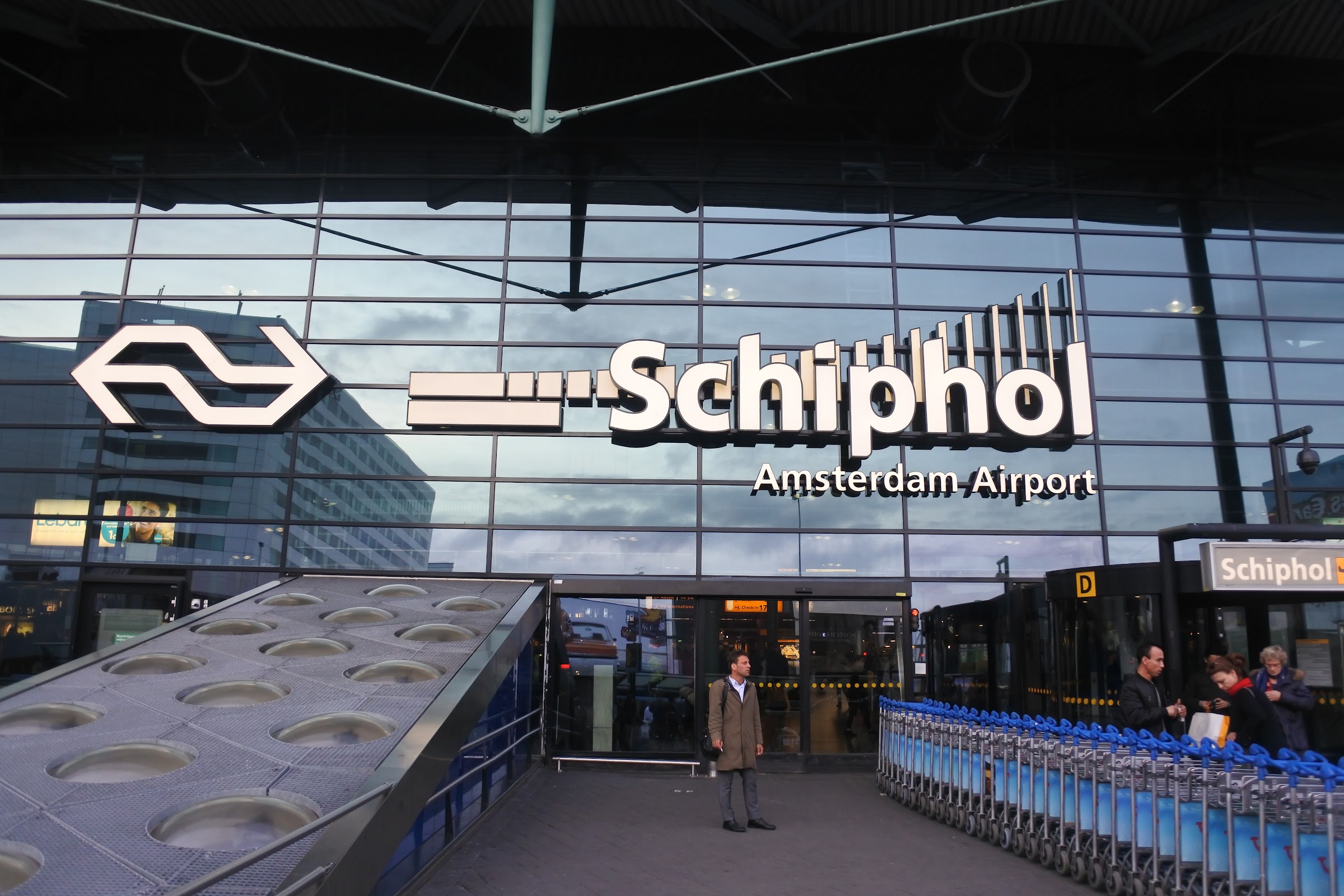 This trip has taught me a lot. Since the trip is the first trip for both Amira and I to explore a new continent and 5 new countries, it was so adventurous for us. After all, we did not use any travel agent – starting with the buying of the tickets to the planning, we did on our own. 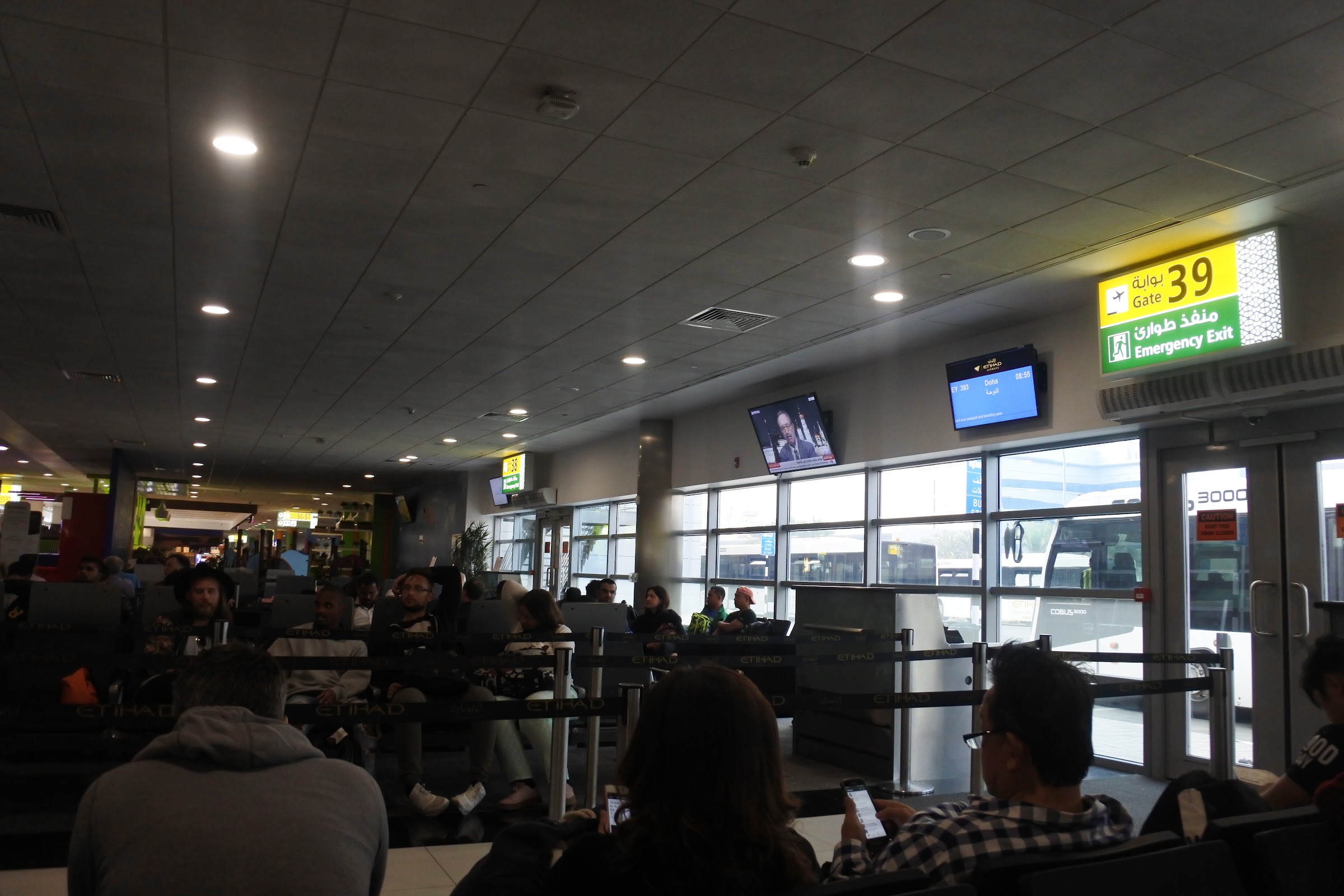 This is also one of my longest trips ever, 14 days total being out of the country and spending all the time with the love of my life – I felt rejuvenated and I learnt more about Amira as much as she learnt more about me too. The opportunity to spend time together in a foreign country, experiencing all the hiccups and challenges together – they made us stronger together. At least, when we have children, there are stories that we can share with our children. Stories that could inspire them to become like us – exploring the world together, learning, adapting and experiencing the beauty that God had given us. 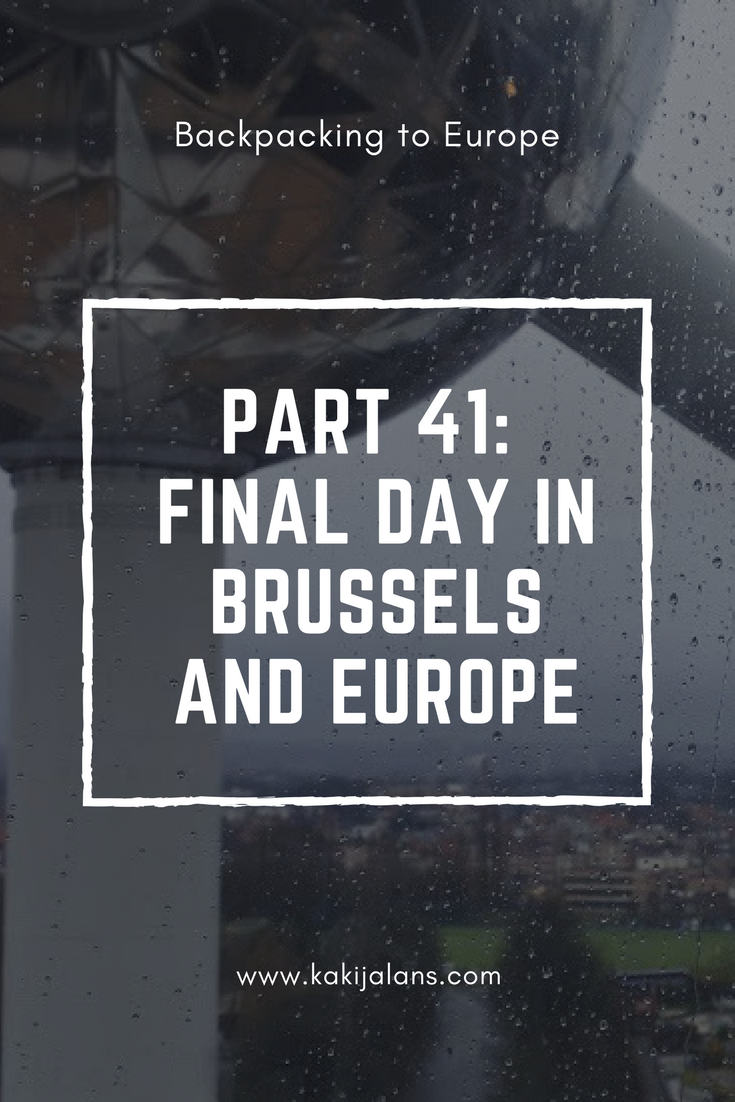